The event is showcasing not just large machinery manufacturers, but also smaller agricultural engineering and machinery firms from across the UK.

We look at the latest livestock kit on show at the event. 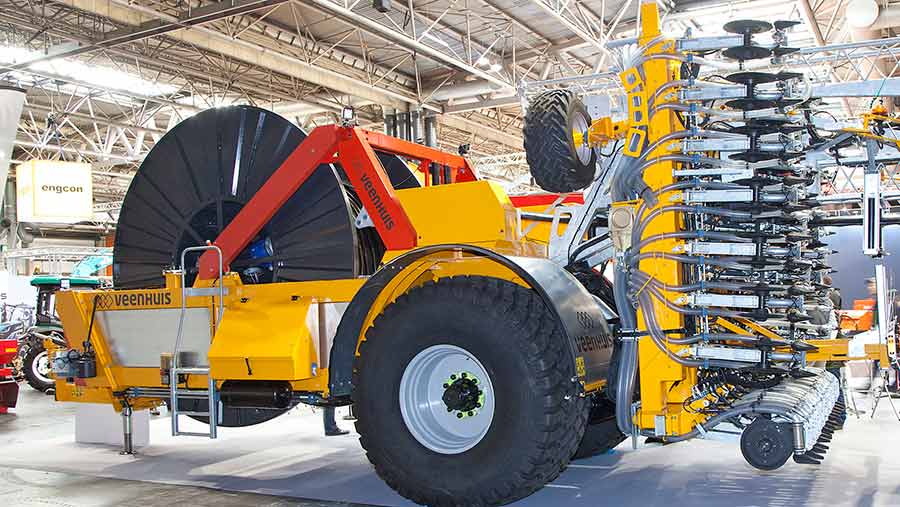 Dutch maker Veenhuis was showing off its Rotomax slurry reel fitted with a NutriFlow precision system to accurately measure the nutrient content of slurry and digestate being applied by its machines.

The unit bolts into the tanker’s pipework and constantly beams near-infrared light at the liquid as it passes by to determine the percentage of nitrogen, phosphate, potassium, ammonium and dry matter in the slurry. Veenhuis says it has been calibrated using all sorts of liquid manures to make sure the readings are as accurate as possible.

By linking this system to the spreading equipment control box and GPS via Isobus, the rate can be varied to make sure the field gets an even dose. Accurate application maps can also be produced to show how much of each nutrient has been applied where.

It’s possible to combine the Nutriflow unit with a front fertiliser tank, which can be mixed with the slurry or digestate if the nutrient content of a certain batch is too low.

The kit at the show was fitted to Veenhuis’ Rotomax reel, which uses a swivel arm to lower the supply hose to the ground and lift it again in the same spot. The end result is considerably less traction damage and no soil smearing, as the tractor doesn’t have to drag the hose over the crop, says the company. 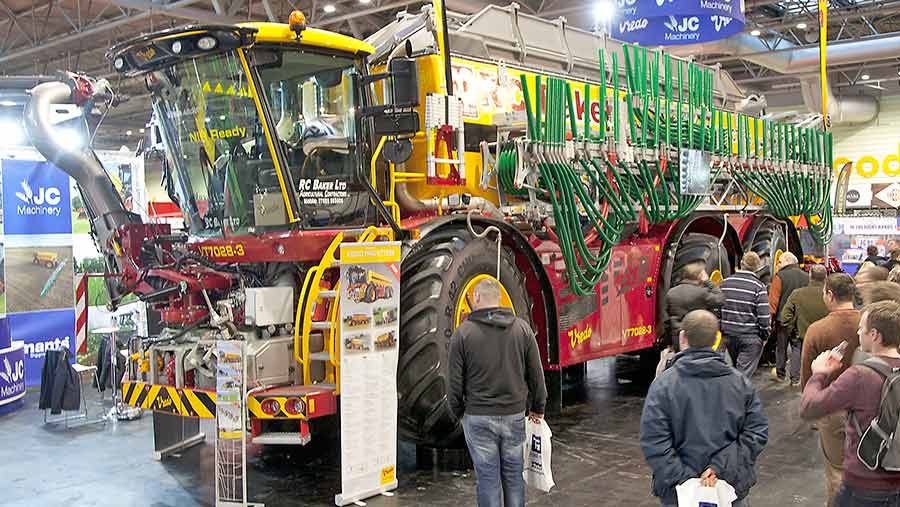 Vredo’s tri-axle, crab-steering VT7028-3 was another show debutant and claims to be the biggest self-propelled slurry spreader on the market when fitted with a 32cu m slurry tank or 35t Tebbe muckspreader.

Its 687hp is provided by a Deutz V8 engine linked to a CVT transmission developed in-house, which drives wheels fitted with massive 900/60 R42 tyres.

For the back of the tractor unit, Vredo has developed a new slurry tank that is 50cm narrower than before, but has the same 32cu m capacity that is vital for filling from a truck and tanker.

This has been achieved by using a flexible slurry bag on the top of the polyester tank, which is automatically filled during the reloading process. The polyester base tank has a volume of 26cu m and the flexible bag offers an extra 6cu m. 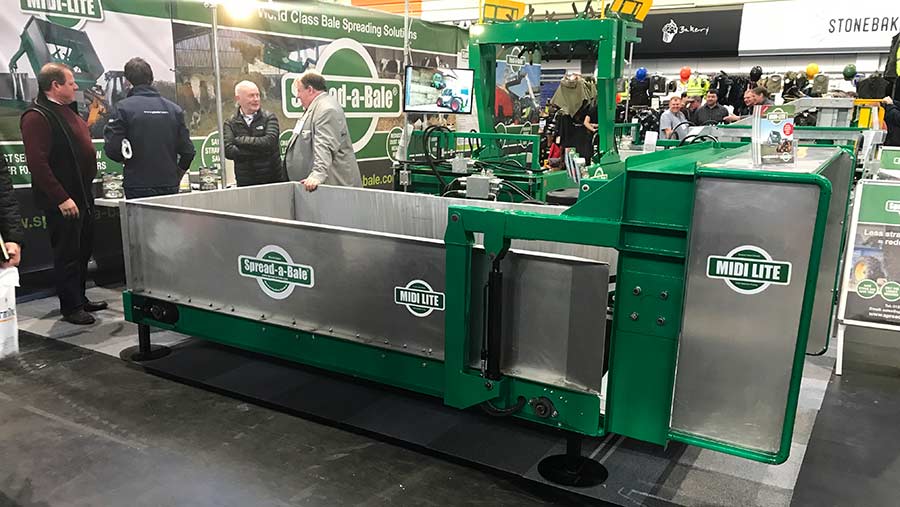 Spread-a-Bale has expanded its range with the Midi Lite, which it claims is the first ever side-mounted, self-loading straw-spreading machine for rectangular bales weighing 500kg.

One of the major perks of the Midi Lite is that it only requires a 1t lift capacity, so is suitable for most tractor fore-end loaders, skidsteers and Hof loaders.

The machine is powered hydraulically and requires a maximum 55 litres/min oil flow to throw the straw up to 14m to the left by way of a single horizontal rotor. The chain drive to the rotor motor can be geared differently to compensate for lower flow rates and the head can be elevated to reduce total width if door access is limited to less than 3m.

According to the Cheshire firm, using a bale spreader can make straw savings of roughly 40% using mini Hesston bales, as well as saving a huge amount of time compared to bedding down with a muck fork. 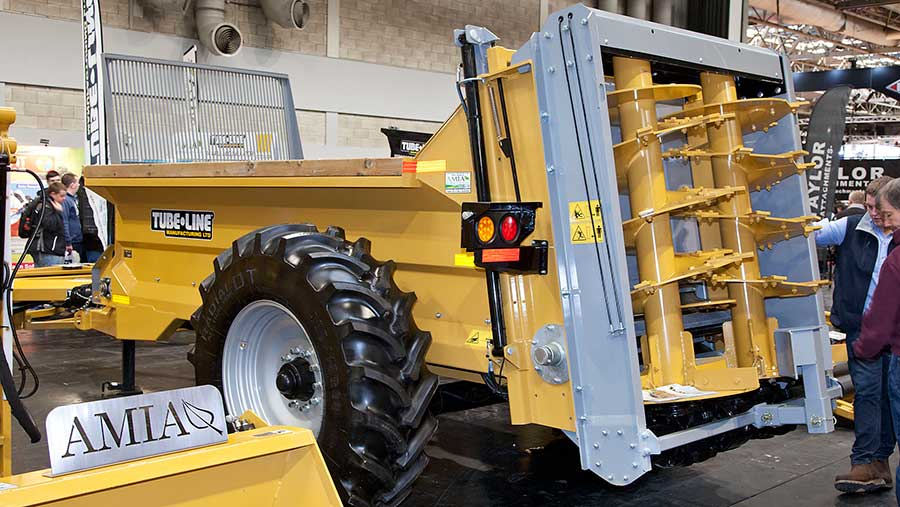 Devon-based importer Amia has added Nitro vertical beater muckspreaders to its rapidly growing product list, which already includes ATV attachments from the US and cultivators from Italy.

The Canadian-made spreaders are produced by Tubeline, which also builds various wrappers and feeders at its factory in Ontario.

On stand was the Nitro 375RS, which provides a 12t carrying capacity and sits on a twin-axle chassis.

A variable-speed, hydraulically driven apron chain feeds vertical beaters that spin at 420rpm, which Amia says provides a decent combination of bite and throw to deliver an even spread.

The asking price is £24,500 and Amia suggests a tractor of roughly 90hp will be enough to tow it. 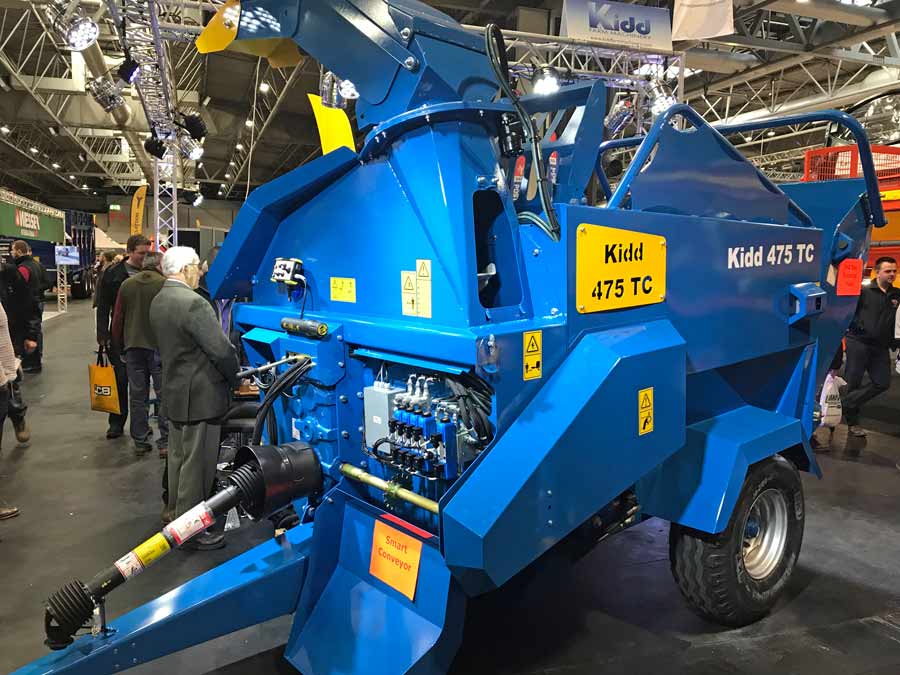 Livestock farmers were treated to what was described as an all-new type of bale processor on the stand of Wiltshire-based Kidd Farm Machinery.

The 475T TC can process straw, hay, silage or haylage, with very little adjustment needed for feeding, chopping or bedding.

A 4.75cu m tub can handle two round bales or two large (80x120cm) square bales side by side, with chop lengths between 30-60mm to suit most total mixed rations.

Central to the new machine is a smart conveyor that automatically feeds the chopping mechanism, pivoting comb and beaters with an even flow of material.