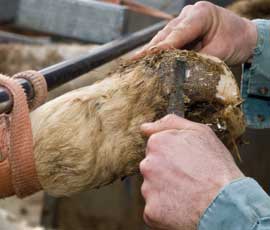 Foot trimming could be a major risk factor in the spread of digital dermatitis, according to initial research findings.

Digital dermatitis (DD) has only been in the UK since 1985 yet now causes up to 30% of all lameness. However, transmission of the disease remains a mystery.

Nevertheless, very early work by vet Roger Blowey and researcher Leigh Sullivan from Liverpool University has revealed that DD has been present on the hoof knife and hands of those working with cattle.

“It used to be thought DD was spread in slurry and the environment, but we have never been able to find it, “said Mr Blowey. “However, five months ago we decided to see whether it was spread on the hoof knife and when the knife was swabbed, data showed the knives used had one or more of the three infectious agents that cause DD on them.

“Although only a hypothesis, I would say the probability is fairly high that the hoof knife is a major risk factor in the spread. Unfortunately, even after simple disinfection of the knife and then taking a swap for testing, it did not always remove the infection. However, we are not yet sure how long the organism lives on the knife,” he added.

Mr Blowey said it was vital farmers try and prevent the disease due to its difficultly to treat. “Feet are simply not healing now and DD has moved from just infecting the skin to penetrating deep inside the hoof, producing a honeycomb of soft, substandard and infected horn. Vets don’t know how to treat and in the more severe cases the infected claw frequently has to be amputated or the animal culled. This means the only option is control.”

Mr Blowey stressed farmers must start viewing DD as a ‘mastitis of the foot’ and treat in a similar way. “You need to treat to stop spread, make sure the environment is clean and as dry as possible and foot-bath twice a day, including the dry cows. It is much more effective to prevent infection from becoming established on the foot than to wait until infection is present and hoping you can do something about it.

“Hygiene when foot trimming by cleaning the knife multiple times between use and hands thoroughly is also important,” he said.