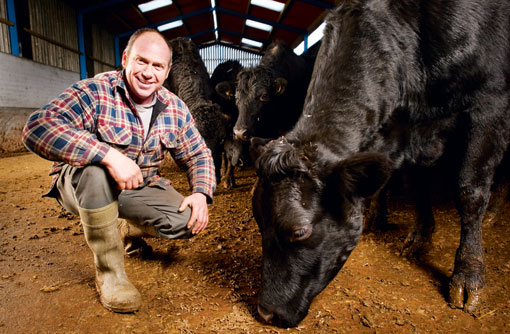 They may not be words widely associated with suckler herd management, but according to Derbyshire beef producer Simon Frost they are fundamental to every part of the system — and at every stage.

“The application of good stockmanship, total commitment to husbandry and meticulous attention to detail, combined with doing everything possible to exploit the full potential of the cow that produces the calf, the bull that sires the calf and the calf itself, is the foundation for profitability,” says Mr Frost.

His beef and sheep farm in the Peak District in Derbyshire is typical of many upland units; the “no frills” system is based on a spring calving herd of Limousin x Holstein suckler cows put to high EBV Charolais bulls with all store calves sold to one finisher.

Well established as one of the most profitable suckler units in the UK, recent performance figures showed exceptional daily carcass gains of 1kg from birth to slaughter achieved by bull calves bred in the herd.

“We’re on a hard farm and we don’t have an abundance of grass to work with, so we’ve got to do everything possible to get the most out of every stage of the system. We have to get the best performance from what home-grown forage this farm is able to produce and so to start with we need the most efficient cow to deal with that forage and provide ample milk for the calf.

“We have small to medium-sized milky cows and they are put to high-index, easy calving terminal sires. We’re using the traditional three-way cross to achieve 23% hybrid vigour and with the right bulls we can get up to 26% hybrid vigour.”

Calf losses deal a hefty blow to profitability in any suckler herd so improvements that can be made to minimise mortality must be carefully looked at and applied.

“Scours and infected navels kill calves, but those are losses that needn’t happen. Dipping navels with iodine isn’t effective enough; navels should be sprayed with Endomycin (blue top) and the calf’s navel must be thoroughly sprayed on both sides. And for calves with scours it’s more important to look at the calf’s eyes and not its back-end. If its eyes are sinking the calf is dehydrating and it needs rehydrating to save its life,” stresses Mr Frost.

Cow management must always be a high priority and that includes making sure cows have the correct balance of trace elements.

“It’s a false economy to cut costs on cow health. We use the best mineral bolus on the market. We don’t get dopey calves because the cows have the selenium they need and the copper is there to boost oestrogen production and progesterone – and all that impacts on herd fertility. A lot of infertility and calf losses could be avoided with a closer look at a herd’s trace element status.

“These are small details of management, but they can have a massive effect on profitability if they keep a calf alive. A dead calf at a few days old is taking all that potential income out of the business.”

But as well as the “application” of good husbandry at every stage, it’s essential to capitalise on the full potential of the cow, the bull and the calf – the three key elements of the production cycle.

The suckler cows at Hopping Farm are all bought privately and since replacements have been coming into the herd sired by a performance recorded Limousin bull, the resulting calves those cows have produced have achieved heavier weights and a better classification.

The 2011 crop of calves recorded a carcass weight of 462kg at just 440 days – that’s with 24kg removed for the calf’s birthweight. With a kill-out of 59.8% (gut full), this equates to a live slaughter weight of 773kg and a daily liveweight gain of an impressive 1.66kg from birth. This figure includes bull calves from first-calved heifers, which are put to a very easy-calving Charolais bull.

Reasons for the difference between average and the top third of producers (EBLEX):

For more from Livestock 2013, see our dedicated page.