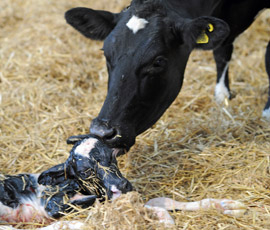 Management of ketosis in freshly calved cows has been made easier thanks to a new ketosis test and preventative bolus.

Up to 30% of dairy cows are thought to be affected by the metabolic disease, with a cost of up to £500 a cow a year.

Keto-Test from Elanco Animal Health is a cow side, quick and reliable method of measuring the level of ketones in the milk produced during the energy deficient state which leads to the disease in dairy cattle. A milk test strip is placed in to a sample of milk and a colour change will indicate a cow’s status.

The test which costs £2 a strip should be carried out on cows that have calved two to 21 days previously. Mike Brown of Elanco Animal Health said: “This will help assess cows at risk and allows farmers to monitor their state,” he said.

A preventative bolus has also been released by the company which under veterinary prescription could help prevent cows from becoming ketotic.

The bolus works in the rumen by changing the bacterial make-up, increasing the amount of bacteria that produce propionate and as a result glucose. It is not a product that should be used in all cows, but only those deemed to be at risk.

The bolus is available on veterinary prescription and farmers can work with their vet to identity cows at risk. At risk cows tend to be those that are fat, cows with longer than average lactations, cows that have lost body condition in the dry period, cows carrying twins and those with an extended drying-off period.

“This is the first bolus released to help prevent ketosis and address the negative energy balance,” said Mr Brown. “There is no milk and meat withdrawal and costs £30,” he added.