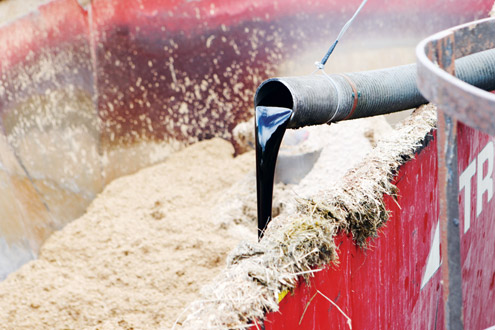 Most of the major suppliers offer good deals on outright purchase or lease. And while second-hand tanks are available, farmers must be assured of their previous use and satisfied they are suitable for storing liquid feed for livestock.

It’s important to know precisely what the tank has been used for, Mark Scott of KW Feeds says.

Finance available for storage tanks is often facilitated by the company providing the particular liquid being used, Mr Scott says.

“Dependent on the size of the tank, a finance scheme – say for a 12-15t tank – would provide 0% finance for 12 months, but the farmer pays the VAT in the first instalment and then pays 11 equal instalments after that. But there is no interest charged.

“For bigger tanks ranging from 20-45t, the finance can be set up for repayments over 24 months, so there’s plenty of flexibility – and payments can start from as little as £100 a month. Where syrups are concerned, such as those from bioethanol plants, they have to be taken in full articulated loads so we advise farmers not to install a tank with a capacity of less than 35t.”

Mr Scott says there is a tendency for bioethanol liquids to expand because they are warm, so it is important to have a minimum of 35t storage.

“Moist feed production is declining, so farmers are looking at other alternatives. It used to be that articulated loads weren’t viable unless you had a large herd of dairy cows, but now a farmer with 200 cows and feeding 6-7kg a day has a big usage of distillery syrup because of the high level of intakes.”

“That’s not a big investment when you consider the cost savings that can be phenomenal – say up to 10p a day for every cow. So if a farmer is feeding 300 dairy cows the tank is virtually being paid off by the immediate savings made on feed,” Mr Scott says.

The availability of molasses-based liquid feeds remains good this season, with a wide range on the market providing farmers with plenty of choice in terms of energy, protein and sugar.

“There’s a liquid feed to suit every need, with proteins ranging from 8-65%; liquid feeds are being used as appetizers to encourage intakes of lower-quality silage and as a protein balancer to feed with straw or cereal silages, or there are liquid feeds as a source of sugar, mainly for use in the winter.

But a farmer intending to forward-buy liquid needs to be aware that while molasses have a long shelf life, syrup-type products are less stable for long-term storage. Depending on the specific product to be stored, syrup-type liquids should be used within four to eight weeks because of their tendency to “settle” within the tank.

Independent livestock consultant David Hendy says liquid feeds are becoming popular, but it’s important to be clear from the outset what is needed in terms of feed value.

“Is it being bought as a source of energy, high sugar or high protein? That’s the question that needs to be asked because there’s such a huge variety available.

“But dry matter is an equally important consideration when including liquid feeds into rations. If it’s a very wet liquid with low dry matter it affects the feed value. It’s something that’s causing a lot of confusion. Dry matter figures can vary hugely across the range of liquid feeds and will have an effect on protein and energy.”