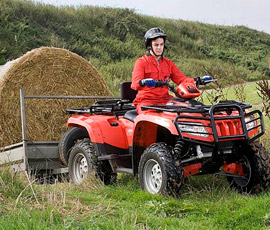 Rural insurer NFU Mutual has launched a major campaign to raise awareness of the dangers of working on farms and to change farmers’ behaviour.

The campaign – Farm Safety First – aims to create a culture of safe farming across the UK using the experiences of people affected by farm accidents to get across the message that farmers face severe risks every day.

A total of 33 farmers, farmworkers or members of the public were killed between April 2012 and March 2013 in the agriculture industry.

Campaign spokesperson Gill Bolton became involved with Farm Safety First after a worker on her partner’s farm was killed.

While the Health and Safety Executive cleared the farm of any blame, the trauma of the event has stayed with her family and farm staff.

“Farm accidents don’t just affect the farmer, but their family and friends, too, and it’s these people we are targeting with our campaign,” she said.

“We believe that by educating a wider group of people we can get our messages through to the farmer population and hopefully have some effect on the number of these tragic accidents.”

Supporters of the campaign are being asked to reiterate five simple safety steps.

These include keeping a daily hazard checklist, not leaving vehicles running when they are stopped, investing in the correct vehicle equipment, always wearing appropriate protective clothing and always carrying a mobile phone.

Farmers interested in helping to raise awareness of the problem are being encouraged to get “social” and join a social media campaign called Thunderclap – where they can “donate” a tweet or Facebook update showing they back the initiative.

The campaign has the backing of the NFU, NFU Cymru, NFU Scotland, Ulster Farmers Union and the Royal Society for the Prevention of Accidents.

For more information about the campaign visit the Farm Safety First page.

Attitudes to farm safety must change

For more news and advice about farm safety matters