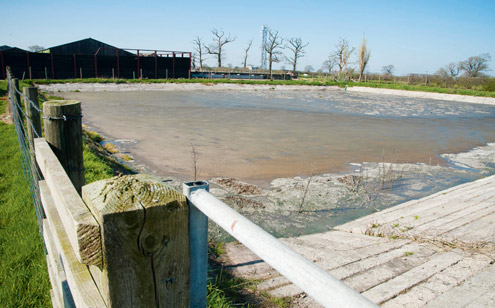 Most fatalities from slurry have, in the past, been caused by drowning or injury as a result of falling into a slurry store. However, a mixture of gases – including methane, carbon dioxide, ammonia and hydrogen sulphide – emitted from slurry when it is disturbed has also claimed the lives of six people in the past two years.

But while there are clear guidelines concerning measures for accident prevention – such as child deterrent fencing, locked gates, covers and tractor-stop barriers on scraping ramps, Health and Safety Executive officers say one of the most effective ways of avoiding accidents associated with slurry stores is to keep people well away from them.

“Perimeter protection and keeping unauthorised people away from slurry stores is paramount,” says a spokesman for the HSE.

“But a child-proof perimeter fence or wall that is erected to prevent any access to the store must be of a high standard and effective locks must be used on any gates. Apertures for suction pipes must also be carefully considered and must be protected to the same standard as the remainder of the perimeter.”

• Have an overall minimum height of 1.3 metres

• Include at least two strands of barbed wire spaced 100-150mm apart at the top.

“The perimeter fence is very important and must be constructed so that it cannot be pushed upwards from the base or interfered with by livestock. Additional barbed wired along the base will help to prevent this,” according to HSE officers.

Scraping ramps are also a potential hazard to tractor drivers and farmers are advised to implement any measures necessary to improve safety. This may involve extending the fencing to the base of the ramp or installing a sheeted gate across the ramp at that point.

“Sometimes farmers prefer to install swinging flaps attached to the tractor-stop rail. While these provide good protection if correctly designed and maintained, there is a risk that they can be easily damaged and fail to swing properly.”

To reduce the risk of being overcome by poisonous gas emitted from slurry stores during mixing, farmers are advised to do this job on a windy day. Children should be kept away from the area when slurry is being mixed and all animals removed from the building.

“All doors and windows of the building must be opened and outside mixing points should be used first. In situations where slats have to be removed, the exposed area by the tank must be covered to avoid anything falling into the store,” advises the HSE.

Once pumping has started people should remain outside the building for as long as possible – a minimum of 30 minutes. If someone has to enter the building another adult must be informed of what’s happening, but stay outside the building to enable help to be sought if necessary. And always remember that it’s dangerous to stand near to the pump or exhaust of a vacuum tanker when it’s being filled.

Toxic gases such as hydrogen sulphide, carbon dioxide, ammonia and methane are produced by bacteria during the decomposition of slurry.

Hydrogen sulphide gas is poisonous to humans and animals. It is:

• heavier than air and is found at ground level, particularly in confined areas on calm days

• smells like rotten eggs, but high concentrations can’t be smelled

• when the crust is broken

• in the first 30 minutes of agitation

• after silage effluent has been added

• after storage for several months

Read one widows story about the dangers of slurry gas