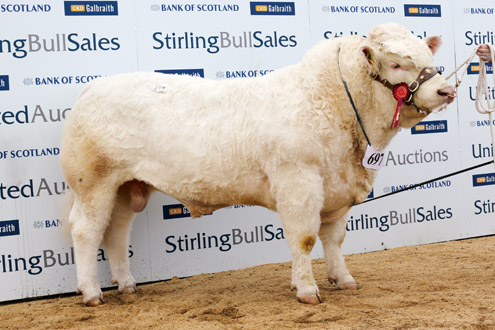 Good gene selection has been influential in the success of one of the UK’s leading pedigree beef herds.

Jan and Sarah Boomaars have enjoyed phenomenal success since they established the Vexour Charolais herd in 2004. They also have pedigree Aberdeen Angus and Hereford herds.

Although they achieved global acclaim when one of their bulls, Vexour Garth, was sold for a record 100,000gns at last autumn’s Stirling Bull Sales, they are modest about their achievements. They prefer instead to concentrate on the job of running the herd, rather than getting swept away by the media interest that has followed them since that sale.

The Boomaars established the Vexour herd of pedigree Charolais cattle on their farm at Vexour in Kent.

Their aim has always been to breed high-quality animals for the commercial sector – animals that have the ability to produce easy-calving and fast-growing progeny.

The Charolais was their first choice of breed when they bought the 405ha farm in 2003; there was a good demand for Charolais bulls and they could see a long-term future for the stock.

“We looked for the breed that was dominant in the world and had a very strong future and decided it was the Charolais,” Mrs Boomaars recalls. “We wanted to produce top-quality, fast-growing bulls with good conformation.”

They could see the potential for rearing pedigree cattle to sell in the UK or for exporting bull semen.

The Boomaars bought two small herds in 2004 and now have 150 cows, which have two calving periods of nine weeks in the spring and autumn.

They apply strict breeding criteria with an ultimate focus on conformation, growth, ease of calving and temperament.

“The quality of our cattle is a function of our breeding females. These are selected for sound and proven dam lines,” Mr Boomaar explains.

Other important breeding traits are easy fleshing and good locomotion. “We aim to breed good size, milky cows,” adds Mr Boomaars, who has a background in farming. His family has been farming in Holland since 1871. “Farming is in our blood and we wanted to contribute and participate in creating a strong, balanced farming industry,” he says.

The Boomaars suggest there is no secret to their success as breeders; it all comes down to good gene selection and nutritional management. “We have been careful with our choice of gene pools and this is the reason why the herd has evolved to create the one we have here today,” says Mrs Boomaars.

Patience is also important and there is an element of luck, too.

It is likely it took more than pure luck to achieve the exceptional success that the Boomaars enjoyed with Vexour Garth; with a 100,000gns sale price, good breeding is more likely.

Vexour Garth is the progeny of Dingle Hofmeister, who is in the top 1% of the breed for his figures. The American partnership, Livestock Capital Company, bought Garth; his semen will be used worldwide.

The Boomaars believe in visual and numeric evaluations for each animal, relying heavily on the Agricultural Business Research Institute (ABRI) breed plan. This identifies the major traits and shortcomings by animal, calving group and sire.

“There is a healthy demand for our bulls by commercial farmers, both off-farm and at auction, which suggests they must meet the commercial man’s requirements,” says Mrs Boomaars.

The herd is a member of the SAC Premium Health Scheme. The Boomaars believe good nutrition has played a role in the success of their cattle enterprise. They grow all their own cereals and silage to provide feed and bedding. This, they say, allows more control in the management of the herd.

“We keep the cows on a very strict ration of haylage and straw, with minerals as required. We like to keep the cows in working condition, with the aim of achieving high conception rates and easy calving,” says Mr Boomaars.

Calves are creep fed ad lib with a mix of 16% protein. Heifers are weaned on to a simple haylage and straw mix, with some protein when required. Young bulls are on a different feeding regime made up of haylage, straw, a special bull mix and a mash.

Inspired by their accomplishments as breeders, the Boomaars established a pedigree Hereford herd last year. They bought their foundation cows from the Hermitage and Badlingham herds. “The most rewarding element of breeding cattle for us is to see healthy animals producing calves with vigour and character,” he says.

Read more about what’s on at the Livestock Event