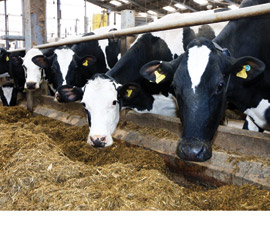 Despite the poor start to the year, results from early cut silage samples show an improvement in quality on the year.

However, quantity is thought to be down by as much as a third and experts warn farmers delaying harvesting in the hope of getting a bulkier crop could actually end up with poorer quality and lower quantity grass silage.

Instead, farmers are being advised to be ready to cut earlier to make up for any shortfall.

Although dry matter has remained consistent at 32%, results highlight a wide range in samples from 19% to 77% DM, with many earlier silages analysing wetter.

“Wetter silages are generally more acidic so be aware when balancing the ration to avoid problems with acidosis. And also be aware you may not have as much dry matter as you think,” says Mole Valley’s senior nutritionist Robert Hawkey.

First cuts are also testing lower for NDF (9.6%), so there may also be a need for additional fibre in the ration, he says.

Analysis also shows crude protein levels have reduced by 0.4% with a mirrored increase in ammonia levels.

“Greater levels of ammonia will negatively affect fermentation and reduce intakes,” he says. “Make sure you leave enough time between slurry application and harvesting to avoid this. But to limit the effects, ensure clamp management is as good as possible for optimum fermentation,” says Mr Hawkey.

Dr Davies stressed that high lactic acid levels in silage was not the cause of high levels in the rumen. “It is far from being a problem; lactic acid is an integral part of effective fermentation.”

An effective fermentation requires a rapid fall in pH and lactic acid helps deliver this better than any other fermentation acid. The rapid pH drop also helps preserve nutrients in the silage. Dropping the pH below 4.2 stops activity of undesirable bacteria which are busy fermenting sugar.

“So the faster you achieve the drop, the more protein and energy will be left to feed the cow.”

Looking ahead to second cut, Piers Badnell from DairyCo said farmers should aim to cut 10 days to two weeks earlier as a rule of thumb to preserve both quality and quantity.

“Be ready to go two weeks earlier then you normally would. You will get a better yield and better quality.

“Go and look at the plant and see what point [of growth] it is at. Get in and take an early cut to prevent it becoming too fibrous.”

He said this would be particularly relevant for dairy farmers needing “rocket fuel” for milkers.

She said quality of these varieities are not as good but it will fill the clamp.

Meanwhile Mr Badnell warned that it was a false economy for farmers to think they could save money by cutting silage additives in first and second cuts this year.

In the long term he says it could come back to bite you, with concentrate costs later in the season far outweighing any money saved in the short term.

“Additives are a good insurance policy that pay. They will enhance quality and make sure you get the full potential [from silage].

“Going down the route of cutting costs can be counter-productive. If you can get first-class quality silage you can reduce your feed bills.”

Instead, he said producers should look at where their biggest risks lie and try to reduce them.

He said this year farmers should give precedence to good quality silage at the greatest risk of coliforms.

“If you put a lot of slurry on the grass early in the season you don’t know if the bacteria has gone or if it’s still there and that could reduce potential,” he explained.

“There’s nothing wrong with spending money as long as it gets you a return.