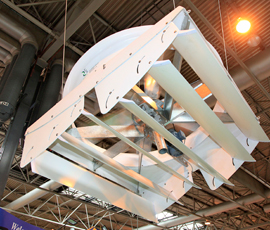 Getting the right airflow in a dairy building is a tricky task but it can make a big difference to the health of the cows. However, a new type of louvred fan from the US, already used in many countries around the world, could help.

They were designed by Wisconsin firm VES Environmental Solutions nine years ago. The company says that several thousand of them are used in the US and other countries, but this is the first time they have come to the UK.

There’s nothing new about using fans in livestock buildings of course, but the VES ones claim to be more powerful that what’s currently on the market, more directable and more energy efficient.

The fans are suspended from the roof about 2.4m (8ft) from the ground and angles at about 30 degrees from horizontal.

The six motorised louvres can then direct the air-flow to different parts of the building to get just the right balance of ventilation. Two fan sizes are available – 1.28m and 1.83m – and four units would be needed for a typical 55m x 30m livestock barn.

The result is a complete absence from heat-related stress, says the firm’s technical director Tom Allison, as well as less humidity, better air quality, less ammonia and lowered mastitis levels. The main sales have been in north America, but many units have also gone to China, Russia.

Are they expensive to run? The company says not, thanks to a very efficient variable drive system that means power consumption varies from 300W to 2.2kW depending on conditions.