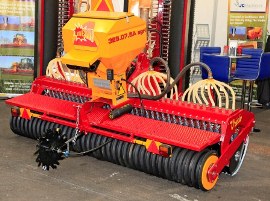 Looking after permanent pasture hasn’t been something that farmers have traditionally given a lot of attention to.

However, slot seeding and overseeding is now seen as an important way to ensure that existing swards are giving the most benefit to grazing animals.

Dutch firm Vredo has traditionally aimed its bigger overseeders at the contractor market. But it now offers smaller models aimed at farmer users.

This year’s Livestock 2013 saw the launch of further DZ A Agri models for those who want to use an overseeder with an air seeder, rather than the gravity-fed box hopper, especially if they are working on hilly ground.

It holds 225 litres of seed, which is a bit less than the box seeder, but at a typical seeding rate of 15 or so kg/ha it shouldn’t need refilling too often.

Rather than the bigger 4.4m and 5.8m models typically bought by contractors, the smaller ones on offer come in 2.9m and 2.5m widths. The basic set-up is the same though – a pair of spring-loaded discs cuts a slot into which grass seed is dropped. Either a smooth roller or packer ring roller then follows.