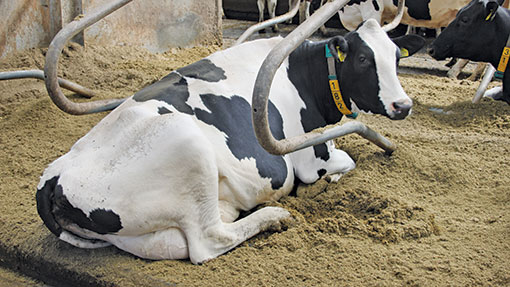 New rules agreed by Defra, the Scottish government and industry stakeholders on the use of green bedding were published on the eve of the Livestock Event. Gemma Claxton reports.

Dairy farmers can continue to legally use recycled manure solids (RMS) as bedding in England and Scotland under strict conditions, but the position in Wales remains under review.

RMS or “green bedding” is made by separating water from manure or slurry to produce material with a minimum dry matter content of 34%.

However, further research is needed to fill significant knowledge gaps, for which Defra has allowed two years.

The use of RMS bedding can still be stopped by Defra or the Scottish government at any point, should uncontrollable risks to public or animal health emerge.

AHVLA veterinary inspectors may also stop its use, or introduce further control measures on farms where risk of notifiable disease spread is considered unacceptable.

For these reasons, DairyCo has advised farmers to “act responsibly” in light of the opportunities and associated risks when adopting this technology.

Compulsory conditions for RMS bedding use

Dairy or beef farmers using or considering RMS bedding must follow these conditions:

What the experts say about green bedding

A fair amount of data on RMS use as bedding is available from the USA and EU, but we don’t know yet how it adapts to the UK, or have the long-term evidence to properly advise.

In the USA it works – a hot, dry climate or a cold, dry climate works well, but it is affected by the higher atmospheric humidity in the UK.

Potential financial benefits are very good, but there are many considerations – for example, udder health and salmonella, however we haven’t seen any major outbreaks attributed to RMS.

But one farmer has struggled with udder health and to an extent this is backed up by higher somatic cell counts and the increase in clinical mastitis cases.

Farmers should thoroughly consider RMS and think hard before deciding whether to use it. Visit others using it, ask how it works and contact your vet before weighing up costs versus benefits.

Can you tolerate a slight increase in cell count if you’re making savings in bedding?

Green bedding is not for everyone. It works for some, not others, and we don’t understand why.

Those testing the system on US dairy farms were one of the first to use it, but have now stopped.

It’s a high management input system and work in the USA has shown it is more effective on smaller farms with high attention to detail.

There is limited anecdotal evidence, but a farmer who’s used it for six months in cubicles as a deep bed and also as a mattress topper has had a mixed response.

The mattress topper was a success – the farmer saw improved hygiene, it aided cleaning the mattress and kept the cows physically clean without using too much bedding.

It was replaced twice a day so bacteria had little chance to multiply. Cow cleanliness was good and the incidence of clinical mastitis halved, although stomatic cell counts rose.

However, the farm also switched to three-times-a-day milking at the same time, so the reduction in mastitis can’t be solely attributed to the bedding.

The deep-bedded cubicles were a different story. The farmer found them difficult to manage and he was unsure whether to rake them; this caused the bed to heat up.

Another thing is it sounds like it’s a free bedding, but the separator and slurry pumps aren’t cheap and have to be factored in. It should be seen as an alternative; it’s very absorbent, but with a high replacement rate.