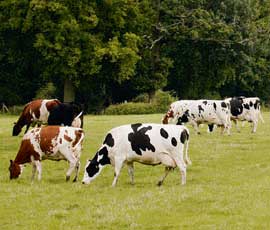 Livestock producers are being urged to plan ahead and treat for fluke this summer in order to mitigate the risk later this year.

The advice comes after the latest figures were released by the Food Standards Agency showing one in five British cattle that were went for slaughter last year had their livers condemned as a result of damage caused by liver fluke.

However, experts are warning there is still no room for complacency among livestock producers this year.

Speaking to Farmers Weekly at the Livestock Event Fiona MacGillivray, veterinary services manager from Merial Animal Health, said it was critical for farmers to kill adult fluke to minimise fluke egg output and reduce the risk of infection this autumn and winter.

“It is really critical to reduce the risk by treating this summer. It’s about planning in advance to target and reduce the risk in the autumn and winter months when you see signs of disease.

“Don’t wait until housing when it’s too late,” she warned.

She said signs already suggested there would be a high fluke burden on pastures due to the high incidence of disease last year and favourable, wet and warm conditions.

Cattle and sheep producers are being advised to treat 8-10 weeks post turnout. Meanwhile any out wintered livestock should be treated now.

“Killing adults at this stage will ensure they’re not able to produce eggs and will break the life cycle,” explained Mrs MacGillivray.

She said treatment would also improve animal performance at grass. Studies show that animals treated at grass for fluke and worms have been shown to give a 31% increase in weight gain compared to untreated ones.

Mrs MacGillivray said it was also a “convenient” time for producers to dose animals with a combination treatment to combat worms at the same time.

Mrs MacGillivray advised producers to stay clear of Triclabendazole, which has been subject to reports of resistance, and instead use a product to specifically target adult fluke.

“The more you expose the parasite to the active ingredient the increased risk of resistance,” she explained.

“If we can try and conserve it for sheep in the autumn it will really help sheep farmers to sustain production,” she added.

Instead, she advised producers to use products containing the active ingredient Nitroxynil or to treat with a combination product such as Ivomec Super if they wished to treat for roundworms simultaneously.