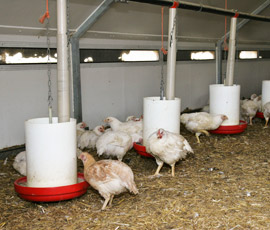 Animal welfare not only relates to the health and physical well-being of an animal, but includes its mental state, according to head of farm animals at the RSPCA, Julia Wrathall.

Addressing the recent Pig & Poultry Live event at Stoneleigh, she said it was also important to think of the animal as an individual, rather than just focus on the welfare of the herd or flock.

“It isn’t just about absence of suffering,” she added. “The challenge is to aim for a good life, where animals actually have a positive state of well-being.”

But educating the public and improving transparency through better labelling would enable consumers to make a better choice.

Sandra Edwards, professor of agriculture at Newcastle University, said that consumers tended to equate welfare with naturalness, while producers linked it to good physical performance and health.

“They’re both right – that systems that give animals good nutrition, environment and health are good systems for welfare. But this idea of naturalness also has a role to play, because a lot of the behavioural needs of animals have come about from their evolutionary background, their genetics, and we can’t ignore those needs if we are to provide them with things that will make them feel good.”

Poultry vet Stephen Lister of Crowshall Veterinary Services said welfare meant satisfying the needs of animals all the time, and wherever possible, satisfying their wants as well.

“The most significant factor in achieving this is stockmanship,” he said. Good animal welfare would be best achieved by ensuring committed producers were rewarded with a realistic return on their investment.