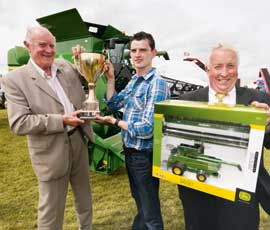 Darren O’Hare (centre) was the winner of the National Champion Combine Operator cup for his accurate and well-set-up combining in the 2012 harvest award. The award is given each year by the UK’s best-known combine trainer Tony Gardiner (left) from New Life Training. Also in the picture is John Deere’s Gordon Day.

Mr Gardiner makes 190 different checks while the combine is working to assess how well the driver is operating it and whether he has set up all the components and systems properly. This follows an intensive training session for all drivers in the previous Spring.

Darren is employed by Waldersey Farms, Southery, Kings Lynn, Norfolk. He was operating a John Deere 9880 STS combine with 9m (30ft) header in very damp green straw wheat on a dull day. Forward speed was 5kph and he was cutting 4.5ha/hour and averaging 10.5 t/ha output.

His spot rate output was 47.2t/hr, says Mr Gardiner, very creditable in such a damp crop and he used the combine’s STS rotor to its best advantage.

His total losses were only 65kg/ha, less than 1% of the total crop, and could not reasonably be improved upon in these difficult conditions.

Some of the operators visited during the 2012 harvest weren’t doing quite as good a job.

Before training, average losses over the front and back of the combine amounted to 293kg/ha, while the worst operators experienced losses that peaked at 768kg/ha. In a 10ha field, that’s a loss of more than 7.5t of crop.

In-field training reduced the average losses by 86% to 41kg/ha, increased the output by 21% and cut fuel use by an average of 28%.