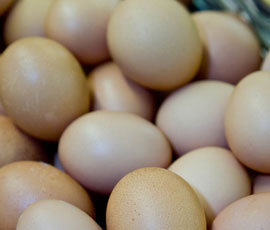 There is no likelihood of any further price increase on free-range eggs in the near term, and there should be no further free-range expansion over the coming year, believes Noble Foods chief executive, Peter Thornton.

“In the egg sector there’s been a seismic change in what consumers are buying in the major retailers over the last six months,” he told producers at the British Pig and Poultry Fair.

Until a year ago, free range was growing and had exceeded 53% of volume egg sales in the retail market, said Mr Thornton.

“Free range has dropped now, and the latest data show it is declining 5% and is below 50% now, while cage is growing its share and has risen by 20%. Organic is continuing to decline, and barn egg holding steady.

“Some of this is a structural change, with customers trading down.”

Another big influencing factor was wholesalers and restaurateurs coming into supermarkets to buy cage eggs, as the wholesale trade was so short. “This says to me that cage eggs are being sold far too cheaply in retailers,” said Mr Thornton.

“This is the toughest retail environment I’ve know in 25 years. Consumers are buying less, wasting less and trading down. Discounters are growing and 40% of all grocery purchases are on promotion.

“I think the big thing that’s happening, and why consumers are trading out of free range, is that the price differential between cage and free range has grown by 12% or 16p/doz over the last three months.

“There is no doubt that in the 18 months from mid-2010 to the end of 2011, returns have fallen significantly. I’m quite surprised by recent (upward) price movements, and a free-range industry that was apparently on its knees has changed overnight into one where expansion is being talked about far too readily.

“There is a shortfall of colony eggs, and with retail sales growing, that’s the market that needs to be supplied. In my opinion, there will be some further UK expansion in colony production during 2012, to come on stream in the middle part of 2013.

“But there is still too much free-range egg which has been cascading into colony, and it will get displaced at some point.”

With free range declining, he urged producers to be “very, very careful” about expanding.

“When you get to 50% of the market, you reach a tipping point. We’re not catching up with consumer demand any more, we’ve met it, and we’re in danger of being consistently over the top.

“I personally do not believe the level of returns the free-range industry has enjoyed up to the middle of 2010 are ever going to return. We won’t get the new colony units until mid-2013, so we have a period of grace. I don’t think we should expand free range in the slightest.”