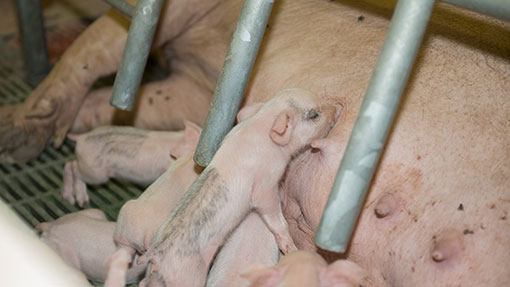 Managing the parity number of sows and reducing the number of sows culled are two areas on which BPEX is set to focus in the coming year in a bid to close the production gap with Danish producers.

Growing margins is not just about reducing costs, but also increasing output through improved efficiency, said BPEX head of technical Andrew Knowles at a pig outloook seminar. “One key measure is the number of pigs weaned a sow a year.”

The Danish sector is achieving 28.8, compared with 23.9 for the UK indoor herd. “UK performance is good, but problem is that the Danes are much further ahead.”

Labour costs are twice those in the UK, but they have the same legislative constraints, feed, genetics and challenges. “It’s all about doing lots of small things well. If the Danes can do it, therefore, it is not about new research, as they show it can be done with existing knowledge.

BPEX has identified some areas for improvement, for example the replacement rate in Denmark and Holland is much lower.

“They are getting in the high 50s [pigs weaned a sow] and low 60s for the lifetime output from sows in Denmark and Holland, while the UK and Ireland are struggling to get 40 pigs out of a sow over a lifetime.

Looking at performance by parity, parity eight sows appear to be performing as well as gilts on piglets alive. But looking at pigs reared, the story is different, with performance dipping below that of gilts by parity six. “Based on this it should be reach six and out.”

However, 32% of gilts in the UK already don’t make it to third parity and only 26% survive to parity six. “This is a huge waste with getting on for 80% of sows failing to reach parity six. There are several reasons for culling, the main being failing to conceive, and this is an area that we will be looking to improve in the next 12 months.”

“We brought in experts and looked at reducing the number of non-productive days.”

The result was that Mr Blanchard reduced non-productive days from 16 to six, so in just one year output increased to 28 pigs weaned a sow a year. “It shows that some UK farmer can achieve Danish levels of output.”