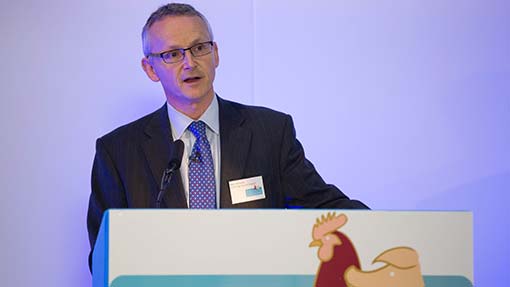 The UK poultry industry needs to displace imported egg if it is to find a market for our growing national flock, as well as encourage increased egg consumption.

Mark Williams, chief executive at the British Egg Industry Council, told an outlook session at the Pig & Poultry Fair that, with Britain’s self-sufficiency for egg at 87%, and per capita consumption below the EU average both presented untapped potential markets for egg in the UK.

See also: Read all of our Pig and Poultry Fair 2014 news

“Imports tend to be coming in at wholesale and also processing, liquid egg coming in from continental Europe. We would love that to be produced in this country,” he said.

“But it’s not a quick fix. At the end of the day you cannot buck a market. We have chick placements which have been increasing will eventually cap, and start decreasing, and our laying flock will start to come back down again.

“With promotional programmes going on and the businesses out there promoting their products it is up to them, and us (the BEIC) to really highlight the benefits of buying British.”

Chick placings, said Mr Williams, pointed to a larger national flock at a time when bird numbers were showing signs of growth across the EU, in an environment of “not too good” prices across the continent.