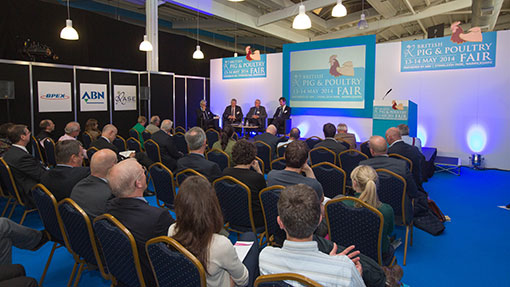 Government funding, available to set up an overarching centre of excellence for monogastric animals in the UK, is in danger of being lost, the British Pig & Poultry Fair was told.

In a session to discuss a £90m pot of money set aside for research projects for the benefit of farmers, speakers warned that the UK had fallen behind countries such as Denmark, France and the Netherlands in applied animal science and research.

The funds form part of the government’s £160m agritech strategy, a scheme that will release cash to farm industries showing a willingness to further science and research.

It was envisioned that money could lead to a practical trial farm for pigs and poultry, and fund a co-ordinating body that helped put science into practice.

See also: More news from the Pig and Poultry Fair

Paul Toplis, a techinical director at AB Agri, said he was concerned industry risked “becoming a spectator. If we don’t encourage applied science that has practical applications, we are at risk of being left behind.

“A centre of innovation would allow ‘solution-led’, collaborative research that focuses on demands and needs from within the industry, allowing producers to overcome its challenges.”

Calling on producers to make their voice heard on the opportunity, he pointed out that access to the government funding depends upon industry showing commitment and a clear plan.

“It’s up to us all to get involved and have our say. We’re in the driving seat to set out an agenda for a centre of innovation. It’s a unique opportunity not to be missed.”

The panel urged poultry farmers and farming organisations to get involved with a steering group to create a bid for the money, which it was hoped could be submitted later this year.