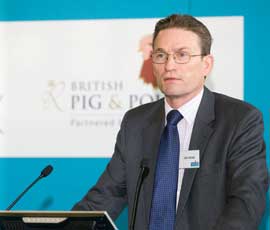 Poultrymeat producers should get behind the industry’s new campylobacter reduction plan in a committed way, according to British Poultry Council chairman, John Reed.

“Campylobacter is the largest food-borne illness, and it’s increasing,” he told producers at the British Pig and Poultry Fair. “A joint industry working group has now agreed a reduction plan which is quite ambitious. Over the next year the Food Standards Agency will be carrying out a survey of retail products for campylobacter, and we will be judged against that score.”

A range of biosecurity measures had been introduced into the Red Tractor scheme, and he advised producers to take it seriously, and use Campylobacter as a benchmark for the effectiveness of their disease control on farm.

The consequences of not achieving the required standard could result in farms having to take more onerous and expensive solutions, he said.

A second major challenge facing the poultry sector was the reduction in the use of antibiotics. The industry had made a commitment to cut out certain antibiotics and drive down the use of others.

“At the same time, we have to defend the use of antibiotics when necessary against all too often sensational campaigns in the media.

“It’s very important that all producers adopt the standards willingly. It is not a box-ticking exercise. We have to demonstrate at all times the high standards that society expects.”

Mr Reed also identified changes in consumer buying patterns in response to the economic climate. In the meat market, chicken was continuing to do well in contrast to more expensive items like lamb and fish, but the main attraction for value-conscious consumers was not chicken, but minced beef.

Consumers were also trading down in the chicken market. Organic and free range were struggling and unlikely to recover until the economy improved. As an extension of this trend, shoppers were turning away from breast meat for the first time, and the growth markets had become whole birds, ingredients and dark meat cuts.

With consumer budgets stretched, conventional chicken had become the market driver and consumers were coming to expect high welfare standards as standard rather than paying a premium.