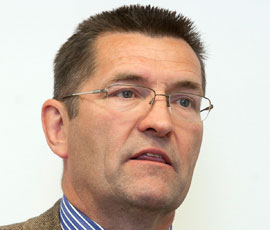 Animal medicine must be used “as little as possible, but as much as necessary” Daniel Parker from Slate Hall Veterinary Practice told producers at the British Pig and Poultry Fair 2012.

“Discovering new antibiotics is not easy,” he said. “There’s a real concern we are losing the ability to use them because of resistance.”

While there was no conclusive scientific evidence which proved resistance was passed from poultry to humans, better management was still needed to ensure effectiveness.

“As far as the science goes we are at a crossroads. But we need to be mindful that, if we use them, we are likely to develop resistance in animals and we need to manage effectiveness for years to come,” he added.

The British Poultry Council has already taken steps to reduce the therapeutic use of antibiotics in the industry, in the form of voluntary initiative.

Poultry farmer Oliver Hoddinott of Feathers Farm, near Wells, in Somerset said reducing the use of antibiotics on his broiler unit had paid dividends.

He first started using antibiotics when bird health decreased dramatically. But one of the biggest management errors was vaccination timing, he said.

“We were hitting them too hard and too early. I got to the stage where I was getting pretty fed up,” Mr Hoddinott admitted.

“Through attention to detail we have seen better weights, improved FCR and the bottom line is looking much better,” he said

See an interactive timetable and news on the British Pig and Poultry Fair on our dedicated page.