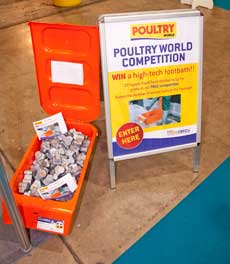 More than 300 visitors to the British Pig and Poultry Fair took part in the Poultry World/Hysolv FootCheck “guess the number of stress toys” competition, with ten lucky winners scooping the prize of one of these innovative footbaths.

The Hysolv FootCheck has been specially designed to maximise biosecurity while minimising waste. It has a ribbed floor to prevent slippage and a lid to keep the rain out.

The actual number of stress tractors was 123, and two entrants – Simon Hayes from Gloucester and Adrian Gough from Shropshire – were spot on. The other eight winners were just one or two tractors away.

The lowest estimate (apart from the handful of people who forgot to suggest a number at all), was 48, while the highest was “over 2,000” (someone was having a laugh!)