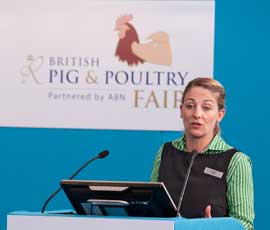 Wheat prices have a “bearish to neutral” outlook for the year ahead, providing some encouraging news for egg and poultrymeat producers at the British Pig and Poultry Fair.

But soya presents a different picture, according to Erin Burns(pictured), raw materials analyst for ABN, where the outlook is bullish due to a balance of factors likely to lead to a tight market.

The overall picture for both cereals and soya was more complex than ever, she said, with macroeconomic factors such as the turmoil in the Eurozone now playing a major role in the underlying unpredictability.

“Overall, market direction remains uncertain and volatile,” said Ms Burns. It was hard to predict whether the normal fundamentals or macro-economic factors would be decisive.

Among the things to watch were increasing reliance on developing nations to bridge the supply gap, with a particular risk of further declines in the South American soya crop. “Fundamentally soya is tight,” said Ms Burns.

There was also always the chance of a weather market developing across the EU and the former Soviet Union.

Another possible danger was the US forecast of a maize yield of 166 bushels/acre, which could prove too high, given a historical average of 161 bushels/acre.

Next month, the June US Department of Agriculture “Stock and acres” report would give a better idea of what had actually been planted in the USA.

Anyone buying in raw materials should look for buying opportunities, she recommended. Key strategies should be to avoid buying on the spot market, particularly in the UK, and to look well ahead.

“Take advantage of market dips, and don’t put all your eggs in one basket. Futures are a good way of managing your exposure.”

The worries that could upset the wheat market were, for the new crop, the expectation that global supplies would be down on 2011/12; rising concerns over dry weather in the FSU; and the effects of a very cold May on crops at the critical growth stage.

For soya, a significant factor was the movement of managed funds to liquidate long positions. The new crop would be influenced by a tight global balance sheet, and although the USDA was forecasting large South American crops, Chinese demand was an overriding factor.