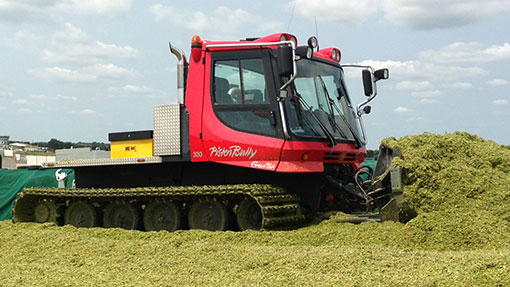 One of the more unusual machines at next month’s Grassland and Muck event will be a German-made Kassbohrer Pistenbully piste-basher.

Normally seen high in the mountains at ski resorts grooming the snow, it’s finding an increasing demand from farmers and contractors across Europe who want a really effective way of consolidating their grass and maize clamps.

A number of models are working in the UK via Suffolk-based importer Off-Piste Agri. The company operates a 330hp 300GT model on its own 45,000t of maize and wholecrop silage to feed a biodigester each year, so it reckons it knows the machines well.

Off-Piste Agri currently sells reconditioned Pistenbully 300 Greentechs with 5,000-8,000 hours on the clock. This typically involves reconditioning (or in some cases replacing) the engine, overhauling the hydraulics and updating the rest of the machine.

The wide tracks mean both models are pretty unstoppable and the importer says that the vibrating effect of the tracks compacts grass and maize very effectively. Weight of the machines is 11t and 12t respectively and prices range from £80,000 to £120,000.

* The machine will be working on the north clamp at Grassland and Muck 2014. The event takes place 21 and 22 May at Stoneleigh Park, Warwickshire. For more info go to www.fwi.co.uk/grassland