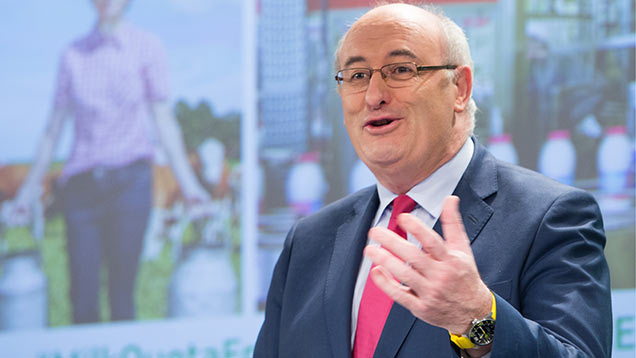 EU Agriculture Commissioner Phil Hogan has pledged to deal with long-running CAP problems as soon as possible, although he won’t decide for another six months on whether or not to conduct an full mid-term review of the policy.

He told a Royal Highland Show seminar that he has received 1,000 pages of suggestions on how to change the current “big beast of complexity” that is the CAP.

“We’ve received 8,000 suggested amendments and we’re going to do what we can, when we can.

“We’re starting this year with greening and we’re going to do something on the common market organisation regulations in September then look at what legislation requires to be changed in 2017.

“That will form the basis of a review of the CAP,” he said.

Mr Hogan made it clear he was taking a fresh look at all recent CAP decisions and at how the EU implemented policies.

He claimed he had “taken the bull by the horns” and had what he described as a “good conversation” with the European Court of Auditors.

“We need to know how they define the legislation and ensure that their interpretation is the same as our own. We need to find out where the goalpost is and then kick in that direction,” he said.

“We want to ensure we don’t have a situation where farmers are worried about the imposition of penalties.

“The food industry can then have the opportunity of exporting more with help from the EU and the Scottish government and drive on towards a market-orientated policy that will mean more jobs in rural areas.”

Mr Hogan also emphasised the need for high speed broadband in rural areas which he said could be delivered through Leader and Rural Development programmes.