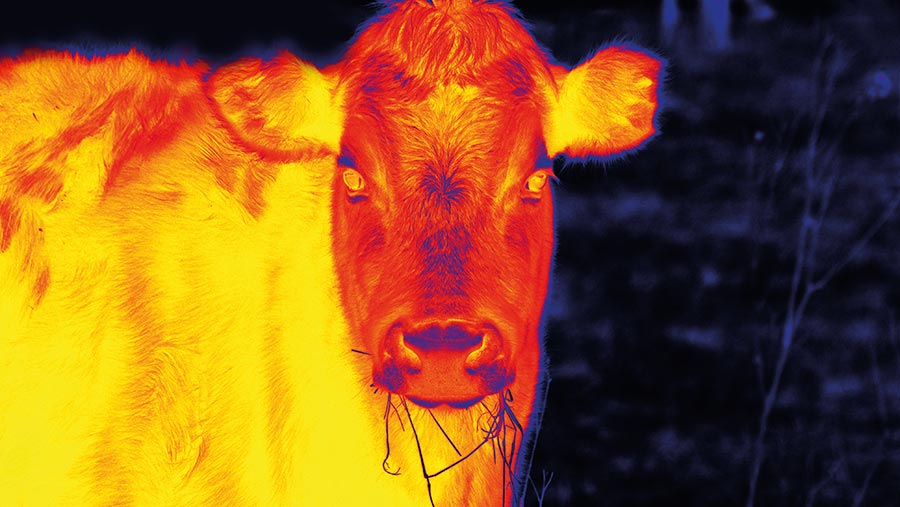 Thermal imaging is common in human medicine, but research from Scotland’s Rural College (SRUC) shows there is huge potential for it to be used in the early detection of cross-species animal health conditions.

Animal welfare and physiology specialist Malcom Mitchell, who led many of the studies at SRUC, says the technology could be a valuable tool in commercial livestock production.

Presenting the research at the Royal Highland Show, Prof Mitchell explained: “[Thermal imaging] allows us to look at the animal – not in the visible spectrum that we use for our eyes – but in terms of infrared radiation.”

It enables researchers to see the temperature distribution across the surface of the animal, which allows them to draw conclusions about what is happening to the animal that may cause temperature changes.

Thermal imaging can be used to detect a range of stress factors including heat stress – which is already being optimised in commercial settings.

In livestock sheds it can be used to detect hot and cold stress, and in haulage vehicles to monitor temperature during transportation of animals.

However, Prof Mitchell says researchers have also found that it can help with the early detection of physiological and pathological stress, including pyrexia (fever) in calves.

Other health conditions which have proven to be detectable using this technology include sub-acute ruminal acidosis, mastitis, digital dermatitis and other issues which may cause localised inflammation.

There is also evidence that thermal imaging can detect temperature changes when an animal experiences pain, he adds.

“What’s more, we’ve found that you get changes to surface temperatures in situations of oestrus, and it can also be used to detect changes in parturition – such as the onset of calving.”

There are also some early indications to suggest that surface temperature changes in relation to methane production, though this needs further investigation, says Prof Mitchell.

“The way we can position cameras means we don’t need to restrain, sedate or even hold the animal in any way whatsoever.

“This means it’s not only desirable for animals, but that the technique itself does not involve the imposition of any stress.”

Prof Mitchell says that while thermal imaging technology is available now, the extent to which it can be used is still being examined. However, the potential is vast.

“The cameras needed for this kind of analysis have a wide range of specifications – from simple devices that are more than adequate for handheld scanning purposes, to much more expensive cameras which have a higher resolution and could be incorporated into modern precision livestock systems, such as robotic milkers.

“They [thermal imaging cameras] ensure very accurate and reproducible data sets which can form the basis of control systems to avoid various stress factors in cattle.”

What is thermal imaging?

Thermal imaging sits in the same group as other types of medical imaging including ultrasound and CT scanning, which are all methods method of quantitively and qualitatively visualising the state of the animal.

It monitors infrared radiation and the heat detection captured via the camera is converted into a visual format, often represented by colours ranging from red (hot) to blue (cold).

When the data is quantified, it then tells researchers – or farmers using the technology – about the state of the animal with regards to physiological and pathological stress levels.