The Royal Highland Show always produces some novelties among machinery on offer and this year’s event was no exception, with manufacturers displaying plenty of ingenuity in their efforts to meet producers’ demand for innovation and solutions to commonly experienced difficulties.

It’s powered by a 160hp Cummins four-cylinder engine, driving through a 6×3 ZF Ergo-Power transmission with manual and auto shifting, and a pair of hydraulic cylinders keeps the chassis stable as it pivots over rough ground and articulates to steer.

Gareth McLaughlin of Kattrack International, Bergmann distributor for Scotland, says the mountings for the three-way tipping body usually fitted allow the spreader to be fitted with little modification to the base vehicle.

This arrangement also makes it relatively easy to remove the spreader, either for another application or to revert the machine to its dumper role. 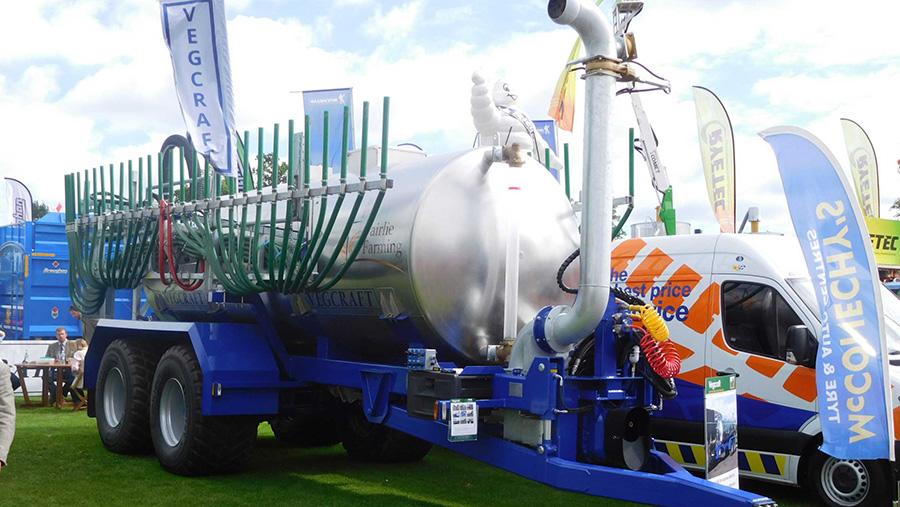 A corrosion-resistant stainless steel is used for the Watson & Brookman tank on this digestate tanker built by McDonald Agri, which manufactures Vegcraft equipment.

The 18,000-litre container is supported on steel cradles and is filled and emptied in about three minutes by a 6,000-litre/min lobe pump from Vogelsang, which also supplied the 18m dribble bar with distribution macerators on each wing.

With generous 710/50R26.5 Nokian Country King tyres fitted to the leaf-sprung axles – the rear unit trailing for easier steering – the outfit runs with a relatively low centre of gravity thanks to the long tank for good stability on hilly ground.

A replica of the one-off with the same electric controls would cost £60,000-£65,000 excluding the cost of the spreading boom, says Malcolm McDonald. 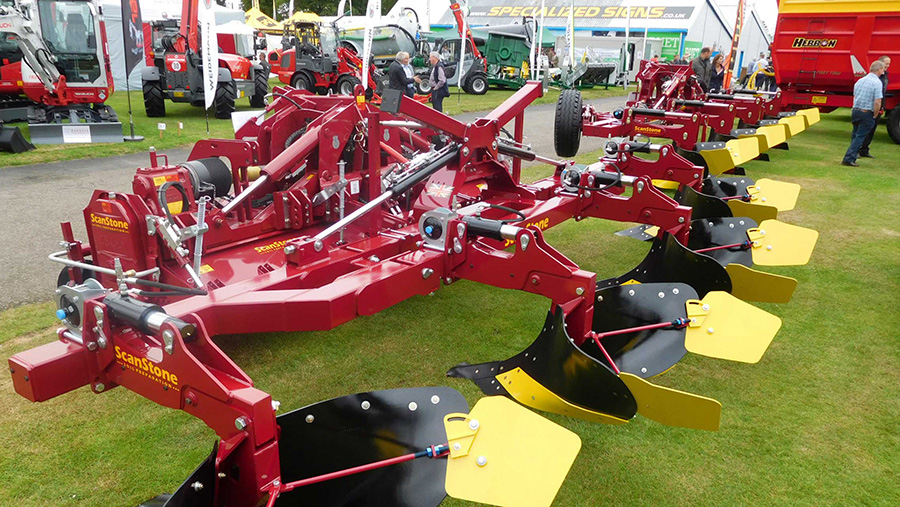 “Our current auto reset design allows the beam to pivot upwards against hydraulic pressure but if the body assembly is still obstructed by a large boulder or tree root, a shearbolt lets go to enable the body itself to pivot away,” says William Skea.

“With our new double-action design, the initial movement is the same but the body assembly itself can also pivot against the hydraulic cylinder to clear a big obstruction and return to work without interruption.”

ScanStone makes two-and four-body tractor-mounted bedformers; a two-row shearbolt model is priced around £5,000, while the new AR Plus auto-reset version is around £8,000.

The four-row model, which is available only in AR Plus format, is around £20,000. 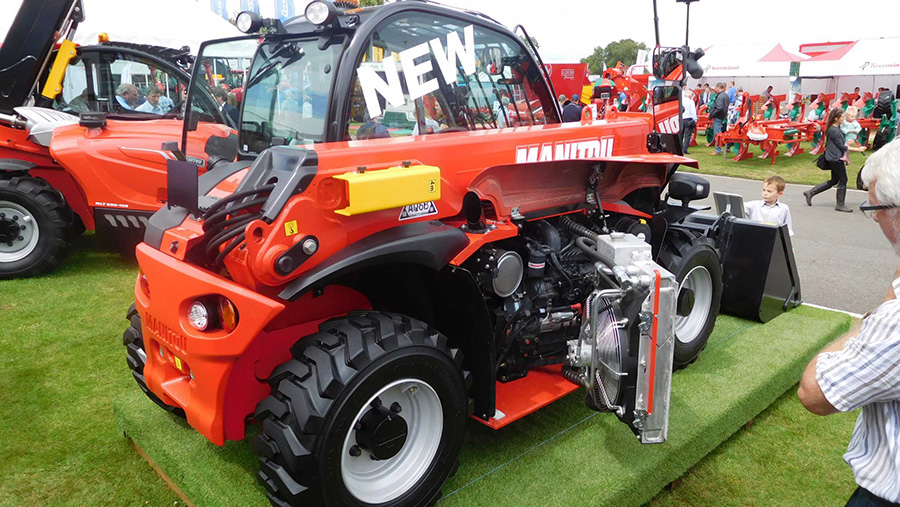 A new mini telescopic handler designed to work in tight spaces offers a full-size cab and easy service access despite the tight packaging of its components.

The Manitou MT420H shown in industrial specification at the Royal Highland Show is expected to be available with different tyres, more work lights and probably a reversing fan for agricultural applications.

The successor to the BT420 Buggiscopic will lift 2t to 4.3m using a two-stage boom, which is offset to leave enough space for the cab.

Apart from decent working space and instruments from other Manitou handlers, the new loader has Manitou’s JSM hand-support joystick which controls the boom and attachments, selects forward/reverse and high/low hydrostatic drive.

A 2.6-litre Kubota engine serves up 49hp, and it is mounted on chassis at an angle to leave room for a cooling pack that swings out sideways for cleaning. 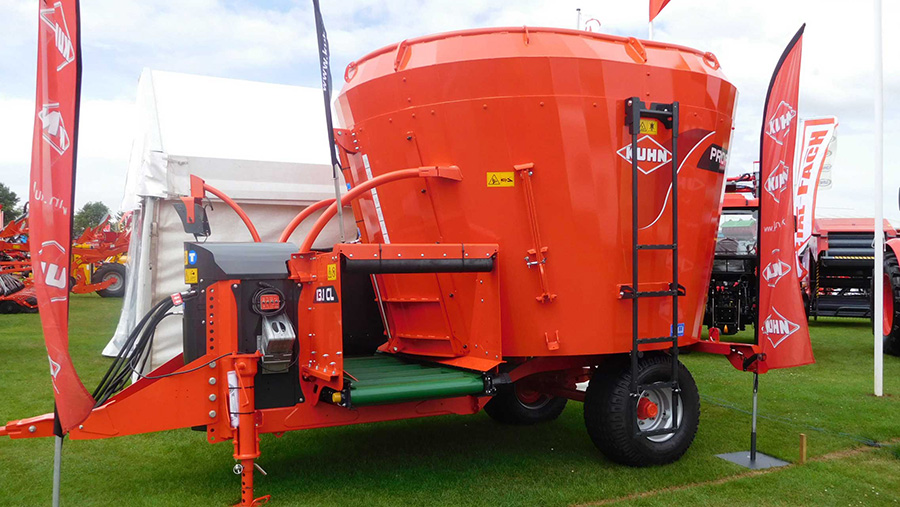 A squatter design for Kuhn’s latest Profile range of tub-type feed mixers has reduced overall height and allowed a bigger capacity version to be added.

The newcomers span 6-15cu m whereas the Euromix series feeders they replace could only handle 12cu m.

“The Profile models have a slightly wider, lower tub for the same capacity, and the tub is mounted direct to the axle with weigh cells there and on the drawbar,” explains product specialist Blair Allan. “Eliminating the chassis and reducing the height of the tub brings overall height down by 25-30cm.”

The crimped sides of the tub are retained to provide added resistance to the forage rotating with the single auger, and the doors on both the side-discharge and front conveyor discharge versions are wider to increase the flow of long-fibre silage from bales and self-loading wagons.

A wider conveyor belt is fitted to match the increased unloading capacity. 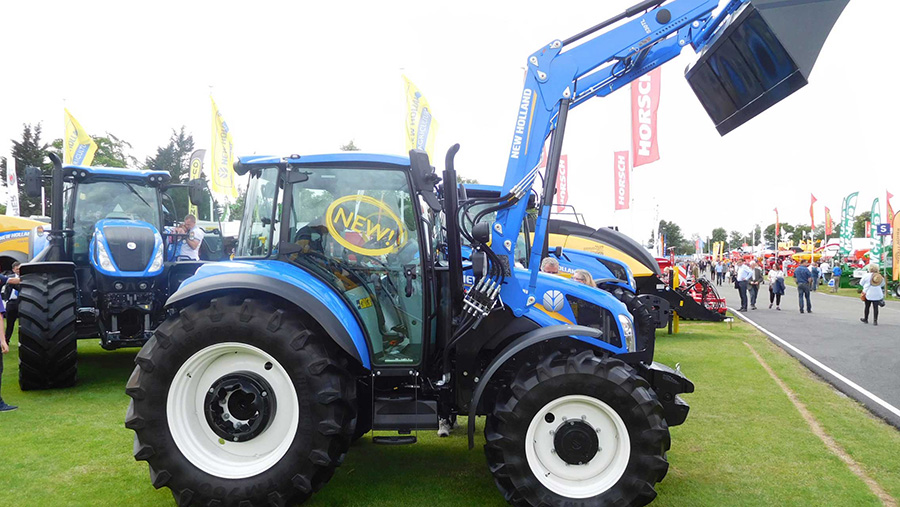 New Holland and Landini made their debut at the Royal Highland Show, showing their lower-spec tractors for users who prefer levers and have little desire for sophisticated electronics.

The 75hp and 86hp New Holland T5 Utility models come with a synchro or power shuttle 12×12 transmission and can be had with two-wheel drive as a simple yard tractor, while the 99hp, 107hp and 114hp versions have the Dual Command 24×24 transmission with two-speed button shift and power shuttle.

A front linkage/pto package is available for the larger three models, which can also have a heavier duty front axle in anticipation of being used regularly with a loader.

The VisionView cab is equipped with a full-width roof window for a better view of a raised loader bucket or muck fork. 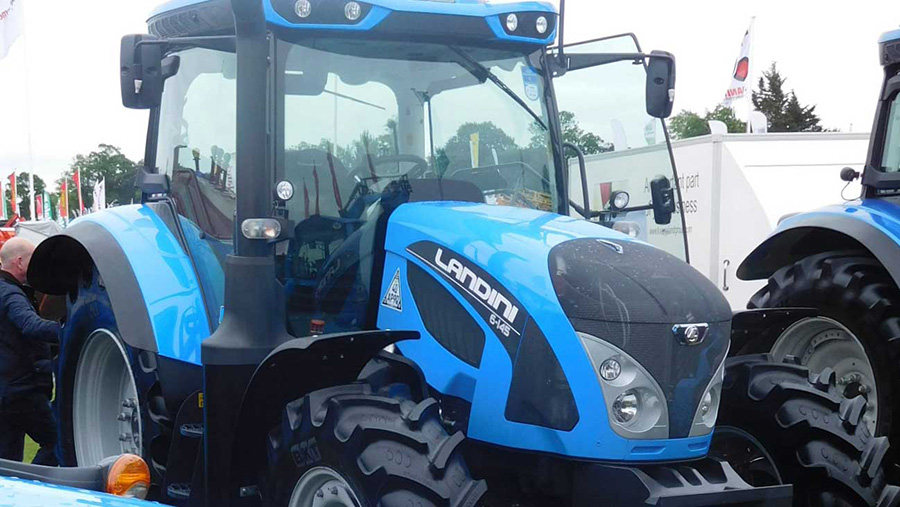 It was first time out for the new Active version of the Landini 6 Series four-cylinder tractors.

The three new models from 143-166hp (175hp when the 6-175 is auto-boosted for pto and transport work), have 88-litre/min gear pump hydraulics, 6300kg rear lift capacity and manual spool valves, with all controls laid out to the driver’s right side.

But the 4.5-litre FPT engine and 24x24Roboshift button-operated transmission with creep option is the same on both versions.

Other spec differences – such as the tyres, work lights and type of aircon fitted – also differentiate the models and result in lower starting prices for the Active versions. 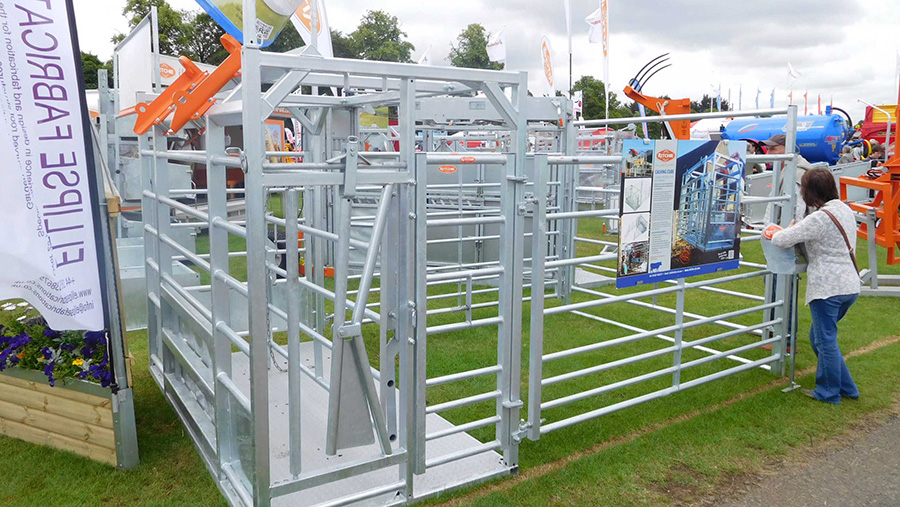 The rigid steel frame of the Ritchie Calving Cube weighs around 900kg and fits onto the headstock of a telehandler so that cows in a suckler herd can be secured and brought safely in from the field and returned later with her calf.

Comprising a yoke, detachable calving gate and fold-away pen, the system can be can be assembled within minutes in any suitable location, says Ritchie Agricultural.

The integral calving gate, with its hinged bottom half and removable side tube, can be lifted out so that the main structure can be used for other purposes – such as transporting an ATV, bales, hurdles or feed.