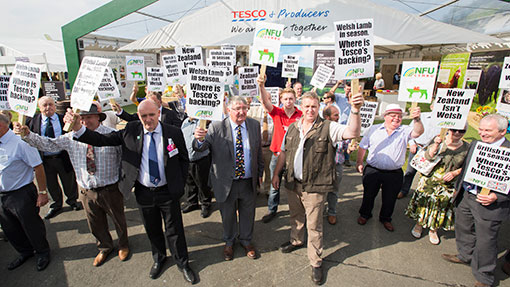 Sheep farmers have staged a protest against Tesco at the Royal Welsh Show amid accusations the retailer is heavily stocking New Zealand lamb at the expense of British produce.

About 50 NFU Cymru members descended on the Tesco stand at about 9.15am on Monday (21 July), carrying placards saying, “British lamb. Where is Tesco’s backing?” and “New Zealand isn’t Welsh”.

The NFU has accused Tesco of breaking its promises to back British farmers by stocking and promoting New Zealand lamb on its supermarket shelves.

To add further insult to injury, the New Zealand lamb that Tesco is stocking is “out of season and some of it is out of spec”, said NFU national livestock board chairman Charles Sercombe.

“It is particularly upsetting at this time of year to be heavily promoting and stocking New Zealand lamb when British lamb is really best in season,” added Mr Sercombe.

“Tesco’s advertising campaign is about promoting best in season and they are now stocking what we would consider to be out-of-season New Zealand lamb and stocking it in promotion. It is out of order.”

Mr Sercombe accused Tesco of being “full of rhetoric” in its commitments to source more British produce and shorten and integrate the supply chain. But it had “clearly failed to do this”.

“The signals this sends out to members is very worrying and the confidence is draining from the red meat sector,” he said.

Last Friday, Mr Sercombe, who is also a sheep farmer from Leicestershire, visited his local Tesco superstore in Melton Mowbray to see for himself how much New Zealand and British lamb it was retailing.

“I counted 43 packets of New Zealand lamb and 14 British on the shelves,” he said.

“That’s a three-to-one ratio in favour of New Zealand lamb. That’s unacceptable, especially when the peak season British produce is from June to February.

“There is simply no excuse for not stocking British lamb.”

NFU Cymru deputy president John Davies called on Tesco to deliver on its promises, adding: “Sell our lamb to the consumers – it’s the best lamb in the world.”

“It’s hard to manage the big drops in trade,” he said. “What’s very disappointing as a Welsh sheep farmer is to see so much New Zealand lamb in Tesco’s at the moment when we are nearly in August.”

Towards the end of the 45-minute protest, prime minister David Cameron walked past the Tesco stand surrounded by his entourage.

Mr Cameron took a few glances towards the protest but carried on walking past.

“I’m glad he saw that we were protesting. I hope he takes a minute to reflect on why we were there,” said Mr Sercombe.

No one from Tesco was willing to comment on the protest.

The price of lamb has dropped significantly in recent weeks due to a surplus in the supply of new-season lamb.

Also, UK consumer spending on lamb has fallen, according to Eblex figures. The SQQ figures show lamb prices dropped from 39.68p/kg in a fortnight to 174.5p/kg (week ending 12 July).

Most of the major supermarkets, including Morrisons, Sainsbury’s and Marks & Spencer, have made commitments to stock only British lamb on their shelves. Asda is the latest supermarket to commit to selling only UK-produced lamb from 1 August.