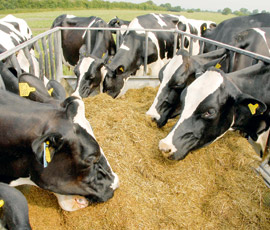 Prolonged hot weather conditions are affecting grass growth on Welsh farms and concerns are growing that forage stocks will be hit for a consecutive year.

As a result he said demand for grass was out stripping supply on some Welsh farms.

“Grass growth in large parts of west Wales, especially costal areas, has ground to a halt.

“The roots are not penetrating through the compacted layer to access the latent moisture in the soil and water moisture sitting in the top few inches has been dried out in seconds.

“It is really highlighting the amount of compaction that was caused last year by the wet weather,” he added.

Mr Davies said conditions have had huge implications for grass growth. One of his dairy clients is being forced to buffer feed silage to his 250 cows.

“Growth on the farm has deteriorated from 50kg of DM/ha to an average of 10kg,” Mr Davies explained.

In a normal year grass growth should be around 50kg of DM in July, but at the moment Mr Davies said some farms were in single figures.

Mr Davies said it could leave considerable holes in forage stocks heading into the winter.

“After last year’s summer there isn’t any bank of forage reserves,” he explained.

To prevent forage stocks from running out Mr Davies said it was critical to measure grass growth and plan ahead.

However not all grassland has been affected. “The difference from farm to farm is huge. Another farm has gone from 50kg of DM/ha to 85kg,” he explained.

Those that appear to be at highest risk of poor growth seem to be free-draining, sandy soils, which are low in EC levels, while heavier clay soils have escaped the effects of the heat.

Sue Buckingham of IBERS said farmers who had heeded advice and took cuts of silage early would have benefited from improved regrowth.

“If you cut a grass sward when it’s young and leafy for high-energy silage it will always regrow quicker.

“But if you cut it when it’s yellow and stalky there’s nothing to photosynthesise.”

Mr Davies warned soils must be in the right condition before farmers attempt to alleviate compaction, or they could cause even more damage to already-strained swards.

“If you can grab a handful of soil and mould it into a ball and it cracks, those are the perfect conditions [for doing remedial work].”

He said as a first point of call farmers should dig a hole in order to assess compaction layers. If compaction is only within the top 2-3in farmers should consider slitting or spiking, but if it’s 5-6in deep subsoiling or mole ploughing may be needed.

Sue Buckingham of IBERS said it was also critical to check nutrient levels heading into next season.

“If lime levels are low nutrients will not be readily available to those crops.”

Forecasters are predicting thunderstorms over the next few days, however torrential rain would be the worst possible outcome, warned Mr Davies.

“Torrential rain would hit the surface and run off and cause flash flooding,” he added. This would also result in nutrient runoff, he said. “In an ideal situation we need three to four days of steady rain to moisten the surface and allow the water to infiltrate the soil.”

More than just physical when it comes to soils