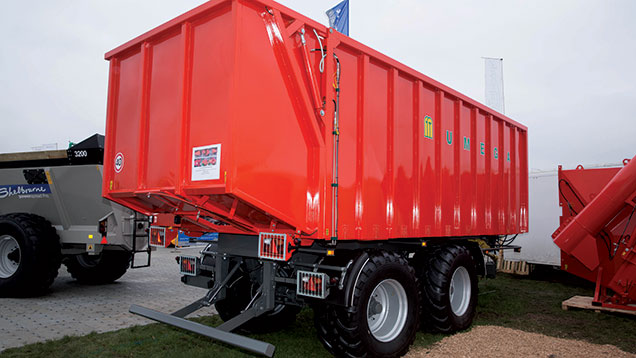 Looking for a new trailer? There were dozens on show at Lamma, including several ejector types. Here’s some of the most interesting ones

Lithuanian engineering firm Umega was touting a novel 20t ejector trailer that doubles up as a chaser bin and rear-discharge muckspreader.

All the owner has to do to convert it is remove the tailgate and bolt on the chaser bin or muckspreader attachment. Power is then sent to the implement via a pto shaft that runs the entire length of the chassis.

There’s then a two-stage hydraulic ejector mechanism in the body that pushes material to the back.

In chaser bin mode the maker reckons the outfit needs a minimum of 180hp on the front and with the muckspreader attachment about 190hp.

The P120 comes with a hydraulic jack, sprung drawbar, twin steering axles and air brakes as standard. It can also be specced with 40cm extensions.

Lamma visitors were being offered the P120 with muck spreader and chaser bin attachment included for £32,000.

Umega has been building trailers at its Utena factory in north-east Lithuania for 30 years and says it is just starting into break into the UK market.

Hi-spec tri-axle trailers used to be few and far between, but now they’re popping up all over the place.

The latest six-wheel offering from Suffolk maker Richard Western features positive steer front and rear axles that actively turn the wheels according to the tractor’s position.

Two rams attach to a plate on the tractor – one for each axle – and as the tractor turns these trigger the steering. This means it can turn tighter without scuffing the tyres.

Looking to buy a full-size trailer that meets the upcoming 37t road regulations coming into force in summer 2016? Scottish trailer maker Stewart has launched a Roadking three-axle trailer that can take 20t of crop on the road and meet all the new rules and regs.

The Roadking weighs 6.5t. Add that to the typical 10.5t weight of a big tractor and its 20t load and you have a grand total of 37t.

The key items that go towards this impressive-looking road-legal combo are the presence of three axles with 8t/axle loading, chunky Nokian 560-60 R22.5 tyres, air suspension to reduce the shock loading on the road surface and an optional £2,000 steering rear axle on the rearmost axle to cut the turning circle.

Air brakes, ABS, led lighting, high-level marker lights are all supplied and the whole ensemble will cost you £29,500.

Stewart Trailers was also showing a neat hydraulically operated trailer cover. Rather than the usual rollover cover that can be a fiddle to use, the driver just presses a button in the cab and the whole thing opens and closes in one smooth step. That’s ideal for people who have to cart things like veg, woodchips and poultry litter.

Cost is £3,500 rather than the £1,000 for the traditional sort and it can be simply taken off by undoing four bolts.

Ejector trailers are popping up like mushrooms in a spring meadow. The latest one comes from French trailer and muckspreader company Rolland, which has joined forces with German fabrication specialist Demmler.

Three models are on offer: a 24t two-axle model, a 29t with twin axles and a giant 32t triple. All use a series of rollers, with three rams pushing the contents backwards. At the end of the ram’s stroke, the pusher door tilts at 45deg to allow the last of the contents to be ejected.

The speed of emptying is likely to appeal to farmers producing maize for AD plants who deal with large quantities of crop.

German company Fliegl was one of the first companies to make an ejector trailer. It was showing its latest Gigant model, which claims to unload five times quicker than a conventional trailer.

One of the key benefits is safety, says the company, thanks to the lack of tipping. Also, the twin axle  model has a nominal capacity of 35cu m but the ability of the machine to compress the crop means that capacity can be increased by 60% to allow 20t of crop to be carried.

A variety of backs can be attached to the machine, including a compacting door, muckspreader door, grain auger and woodchip door.

There were some pretty sizeable trailers at this year’s Lamma, but it’s unlikely to be anything quite as big as this Belgian-made Dezeure trailer. Called the Multi Trans Max, it uses a front-pivot system with a moving floor taking material to the back of the unit. Crucially, that also means it can stay in the field and unload into trucks or trailers parked on the road.

It is equally happy dealing with potatoes, sugar beet, grain, carrots, silage and biofuels and with the full 33t discharged in just three minutes it won’t hold up the harvester.

Two or three-axles can be specified and the front and rear wheels can be steered. They can be powered too.

A linkage bar keeps the wheels following neatly round after each other and a remote control system allows you to alter the speed of the conveyor from a distance.