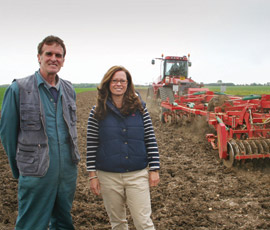 Spring-sown crops and ploughing will play bigger roles in the future on the 1,400ha farmed north-east of Lincoln by Helen Rainthorpe and her team at JRR Farms.

They hope it will help stem sliding yields under the current regime, which involves extensive use of repeated min-till and a rotation of alternating wheat and oilseed rape, while also providing more opportunity to tackle a significant blackgrass problem.

“Oilseed rape yields are probably 10-15% down on where they should be because of the effect of disease, and wheat yields have also suffered from the intensive winter cropping rotation,” says Mrs Rainthorpe. “It’s time to develop a more sustainable rotation that may give us a profit hit initially, but will perform better in the long term.”

Ploughing every fourth year and increasing the amount of spring cropping to about one-quarter of the arable acreage will be the cornerstones of this approach. Minimum-disturbance, one-pass subsoiling and broadcasting of oilseed rape is also being tried in the hope of reducing blackgrass germination in the crop.

“We have triple R-rated blackgrass – some of the most resistant you can get – and also high dormancy, so delaying sowing date is of limited value,” says Mrs Rainthorpe. “With cereal herbicides such as Atlantis losing their effectiveness, we have no choice but to introduce different control strategies.”

Spring-sown crops featured more prominently in the 2013 harvest, although mostly because of the horrible autumn weather of 2012 that forced cropping plans to be torn up.

Spring barley accounted for 192ha of the arable acreage, rather than a more typical 30ha, and 62ha of spring beans went in. Sugar beet grown by a neighbour accounted for a further 95ha.

Double-low and high erucic acid varieties of winter oilseed rape took up 330ha, with 550ha of mainly winter feed wheat completing the cropped area. The rest of the farmed area is in entry-level and countryside stewardship schemes, which, among other measures, has seen 20 miles of hedges planted in the past 10 years.

The farming operation comprises several blocks of land acquired over the years and a range of soil types – from the light-textured limestone of the Tillage-Live site to much heavier ground further east.

All straw is sold to a local turkey farm and to supply a biomass-fuelled power station. But even with surface trash limited to stubbles, last autumn’s persistently wet conditions proved the undoing of the implement that has become the mainstay of the crop establishment approach.

Despite generous spacing between the discs, tines and packer of the 4.5m Kverneland CTS Evo trailed cultivator, the wet, heavy soils would not flow through the machine, says JRR Farms foreman Andy Worthington.

Conditions were so difficult, in fact, that redundant implements were dragged out of the nettles to be refurbished and pressed into service once more.

The most difficult autumn in recent memory was a shock to Helen Rainthorpe. “I’d had a pretty easy introduction in my first year running the business, but last autumn and spring were horrendous, as the incessant rain made the land increasingly difficult to work and all our plans went out the window,” she recalls.

“We literally had to decide what to do and how to do it field by field and day by day.”

The usual approach for establishing oilseed rape after wheat is a single pass with the CTS cultivator straight after the combine. Its leading discs and heavy spring tines break the surface while the shallow subsoiling tines break up any compaction to encourage water drainage and deep rooting.

Seed is placed ahead of the steel packer rings by a Väderstad Biodrill and the finished seed-bed is consolidated by a separate pass with a Väderstad Rexus ring roller to achieve maximum seed-to-soil contact for rapid germination.

“We planned to use the CTS for about half the oilseed rape acreage and compare it with broadcasting from a modified Spaldings FlatLift, which we use on land needing deeper subsoiling,” says Mr Worthington. “But the conditions meant we had to confine the CTS to the easier land and use the FlatLift more often.”

This implement was altered from its regular configuration by removing the surface cultivating discs, bringing the packer forward and cutting down the wings by 50% to reduce lift.

In combination with its wider tine spacing, this aimed to minimise the amount of soil disturbed at the surface and the resulting blackgrass chit.

The Kverneland implement is also the frontline tool for preparing cereal seed-beds; the Evo version with its leading discs replaced the original model, which had given good service for the previous five years.

“In the right conditions the CTS is fantastic, but the conditions last year called for some drastic action to get the heavy land prepared for drilling,” says Mr Worthington.

Pulled from the nettles

It also helped that the farm’s 8m Horsch Sprinter drill is a tine seeder. “It’s a brilliant machine, especially in the wet, with lots of space between the tines for clearance,” says Mr Worthington.

The ability to remove the rear set of four furrows from the 12-furrow Kverneland “wagon” plough was another plus for the farm’s choice of implements once conditions became too difficult to work with a full complement of bodies.

“Getting the heavier land ploughed was still a challenge,” says Mr Worthington. “It took a lot of frosty mornings, and we were still at it in early December.”

Despite these difficulties, confidence in the current implement choice has not been dented and in a more typical year, all should be well.

“We’ll be using the plough more and comparing the effect on grassweed germination of using the CTS Evo cultivator and our modified FlatLift, which I hope will help us improve blackgrass control,” says Mrs Rainthorpe.

“But most of all,” she adds, “I’m hoping for an autumn that isn’t anywhere near as stressful as the last one.”