Visitors to last week’s Tillage-Live event were treated to another September scorcher as the mercury touched 30C at Monks Kirby, Warwickshire.

Here Farmers Weekly’s Machinery team presents some of the latest cultivators, drills and sprayers being demonstrated to potential shoppers in the hopes of getting them to crack open their wallets. 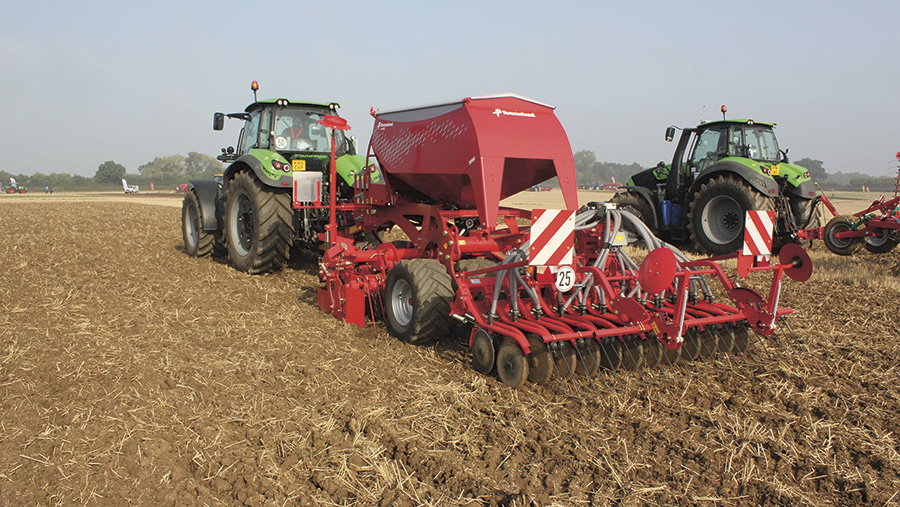 Kverneland’s U Drill has proved popular in Europe © Adam Clarke

Norwegian outfit Kverneland has released 3m and 4m version of its U-Drill, aimed at growers with tight spots around the farm where extra manoeuvrability is required.

The 3m U-Drill 3000 – with a power requirement of 150-160hp – was on show at Tillage-Live for the first time and has been selling well across the Channel on farms with about 400ha.

Two rows of 450mm discs work the soil, which is levelled off by a tine harrow and consolidated by easy-to-pull offset packer wheels ahead of disc coulters set at 12.5cm.

Front-mounted packer wheels come as an optional extra and help maintain even seed placement, preventing the drill pitching forward and lifting coulters out of the ground if the tractor bites.

A 3,000-litre tank – available in grain only or grain-fertiliser options – and electronic metering delivers seed to the coulters, while a 40 litre/min hydraulic pump has been replaced by a more efficient 28 litre/min unit to drive the fan, minimising reduced flow elsewhere.

All adjustments to disc and seeding depth can be made from the cab via a simple control system, a while a fully programmable headland management system makes ins and outs a doddle. 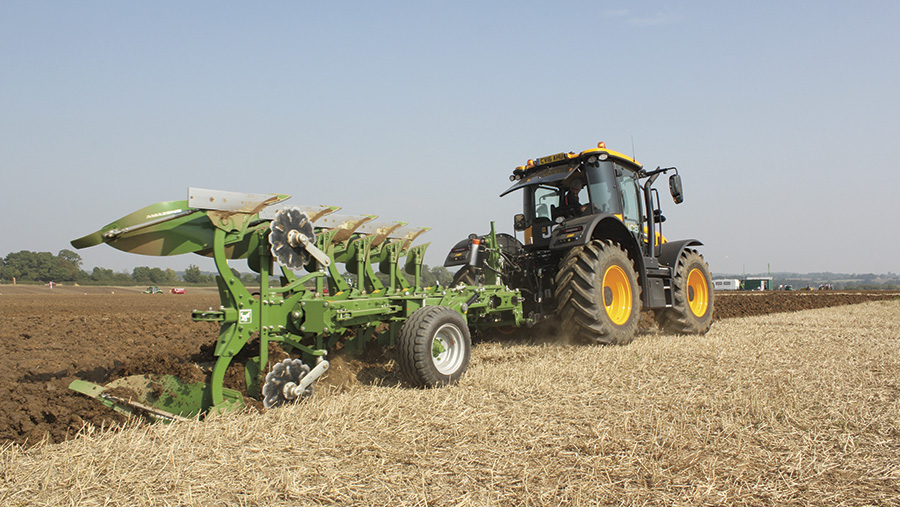 Amazone boldly stepped into the plough market in 2014 and recently expanded its five- to six-furrow vari-width Cayron range to include a hydraulic auto-reset option for growers with stony soils. 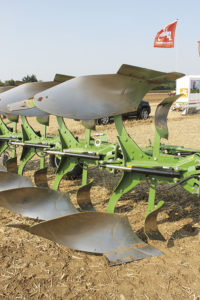 The Cayron 200 and 200 V – which comes with hydraulic furrow width adjustment – maintains all other key features, including a 240hp headstock, 30-55cm furrow widths, 1m body to body clearance and 83cm frame height for stress-free trash management.

On top of this, there is now an option to add S-Force, an auto-reset system that is run off a single-acting spool, with pressure adjusted by the operator from inside the cab.

When an obstacle is hit, a hydraulic accumulator on each leg allows oil to be released from the ram, lifting it clear and once passed pressure quickly returns to get the furrow back in work smoothly.

Lift height is up to 45cm and lateral movement is up to 20cm, so there is plenty of play to negotiate big stones without pulling them up or damaging the machine.

A shearbolt system remains in place if movement exceeds these limits.

The front leg has an 18% greater release force from a beefed-up ram for penetration on headlands and compacted furrow walls.

Pressure can be set between 800-2,000kg to accommodate easy-going to unforgiving soils.

If minimum-tillage is your preference, the firm was also showing off its 3m Cenius 3003 Super high-speed cultivator, first launched at Cereals but making its working debut at Monks Kirby. 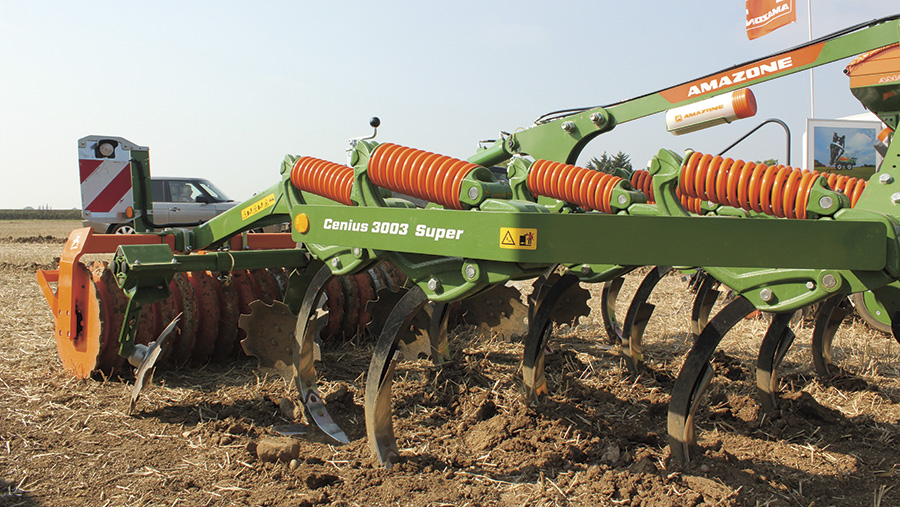 The Super uses a pressure spring overload device instead of the shearbolt system on the Special version and this sits up top to tidily keep it out the way of soil boil. 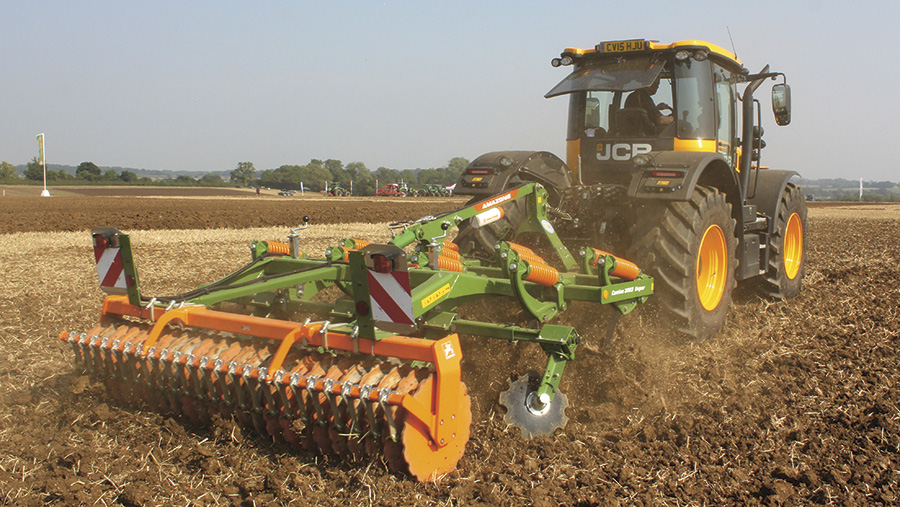 A tougher breaking force of 600kg makes it more suited to heavy or stony ground and comes with the new DW 600 packer-roller at a costs of £20,650. 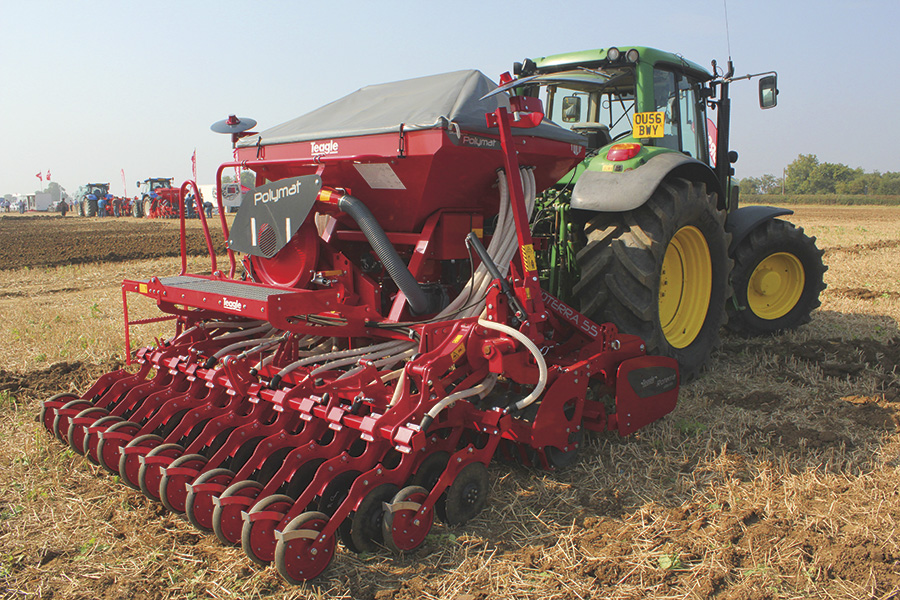 Teagle has added a new high speed disc (HSD) system to its list of coulter picks on 3m and 4m Polymat Profi-Line seed drills, broadening working capabilities in a range of conditions. 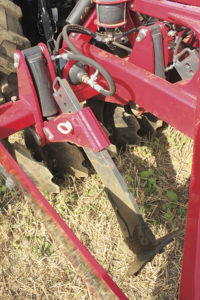 The British-based company only offered double disc or Suffolk coulter options until now, with the manufacturer’s new HSD system offering improved seed placement and the ability to drill directly into stubbles.

This is achieved by larger 300mm press wheels and a hydraulic torsion bar suspension system that can generate coulter pressures of 5kg-120kg and is adjusted from the comfort of the tractor cab.

Teagle’s Vario-S cultivator has also had some updates for this season, with greater clearance between discs and frame to ease trash flow where residues levels are high.

The redesigned chassis also helps reduce load on the tractor, which can be trimmed further by a new optional hydraulic folding packer mechanism that shortens the overall length and shifts weight closer to the tractor for transport. 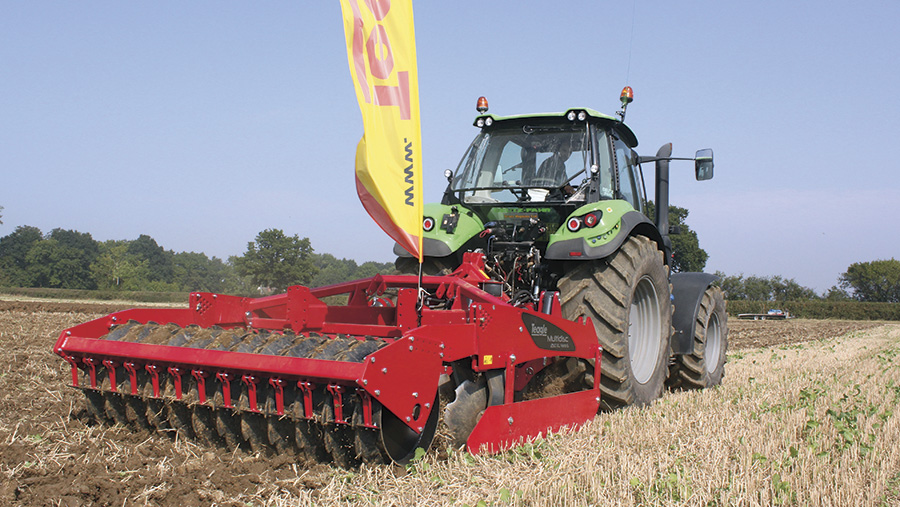 The Teagle Vario-S has a redesigned chassis © Adam Clarke

These can be lifted in and out of work from the cab, which is particularly useful if stubbles only need a light discing.

Ripping legs can then be dropped in quickly and easily on the go for lifting out tight tramlines or compacted headlands. 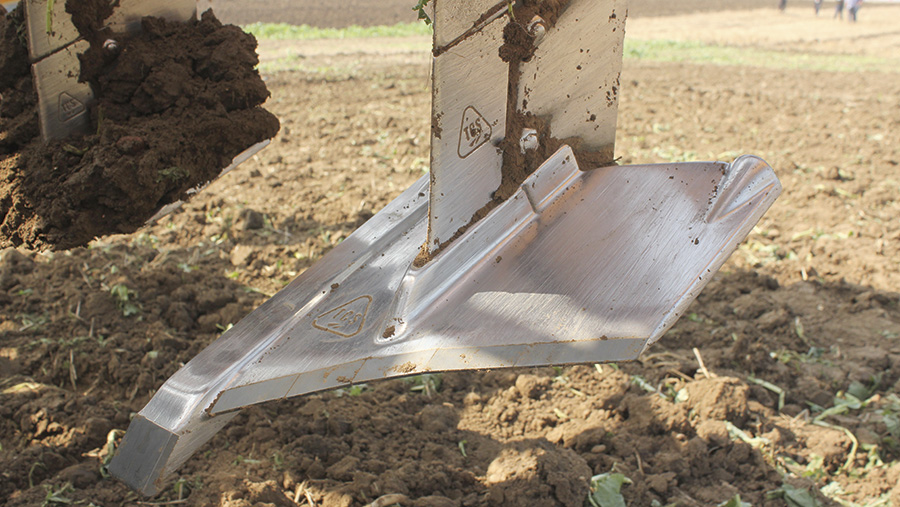 Standard ploughshares for the deep tines only had a carbide “toenail” on the point and wing, but the new Carbi-Protect has a more robust coating on all leading edges and extends life expectancy five to 10-fold, depending on soil conditions.

A new Mulcher disc with a grooved profile – costing about £145/m – is also added to the wearing parts list and is said to improve chopping and mixing of residues and maintain its effectiveness as it wears compared with the scalloped version. 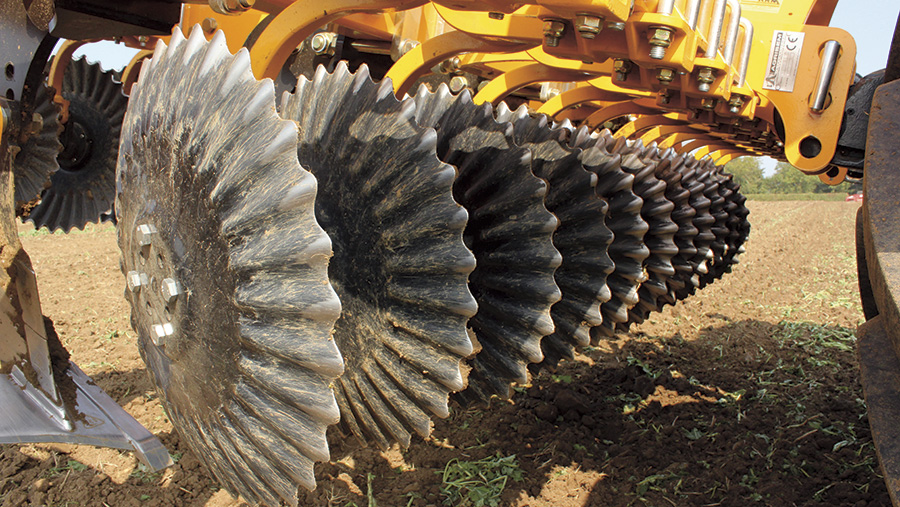 Along with improvements to wearing parts, a more comfortable ride on the road can also be achieved on the 3m mounted version, with an optional hydraulic folding packer roller that lifts it up and over the frame.

The company reckons it is the same as 300kg extra weight at the front of the tractor and adds £895 to the base price.