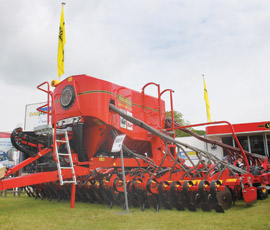 While applying fertiliser at drilling is becoming increasingly popular in England, for Scottish farmers it’s long been the way to give crops a kick start to counter a much shorter growing season.

With the size of arable enterprises continuing to grow, Vaderstad has launched a 6m version of its Spirit C “Next”.

Previously the largest model was a 4m. It’s more than just wider wings, though – the fan is now integrated into the front of the hopper to reduce noise and improve air flow, while load-sensing hydraulics allow independent raising of the drill’s cultivation elements and coulters.