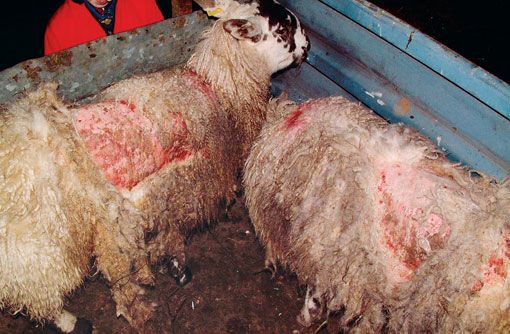 The whole of Great Britain needs to work together to stamp out sheep scab, a leading sheep consultant has claimed.

Since compulsory dipping was deregulated in 1992, there has been a huge spike in the number of cases of sheep scab in the UK. It is now estimated there could be as many as 12,000 cases a year.

“It is big problem and it is [an issue] we shouldn’t have,” Adas consultant Kate Philips told farmers at the NSA Sheep Event, Malvern, yesterday (30 July). Wales’ Animal Health and Welfare Strategy Steering Group has presented a report with recommendations to eradicate sheep scab to the new farm minister Edwina Hart.

If enforced, the legislation would see the treatment of all infected flocks made compulsory and movement restrictions would apply to these flocks. Farmers would also be obliged by law to report all cases of suspected scab.

But Ms Philips said England, Scotland and Wales needed to take a joined-up approach to tackling the disease to effectively control the disease across borders.

Sheep scab is highly contagious and can live off sheep for up to 18 days, so markets and transportation are seen as reservoirs for disease transmission.

Ms Philips added: “There is a nucleus of irresponsible farmers that don’t deal with it.”

She said it was often this small population of farmers within a community that spread disease and made it hard for other farmers to keep on top of.

She suggested farmers needed to “name and shame” these farmers into taking action.

“It is our responsibility as farmers to dob them in. Why should we let those people that are irresponsible put us down?”

She also said Defra needed to take a stronger stance against producers who breached the Sheep Scab Order.

The order stipulates that it is a criminal offence if keepers of sheep fail to treat visibly infected sheep and other sheep in the flock. It also states that infected sheep shouldn’t be moved, expect for treatment purposes.

She said markets should also “make a stand” and send itchy and visibly infected sheep home.