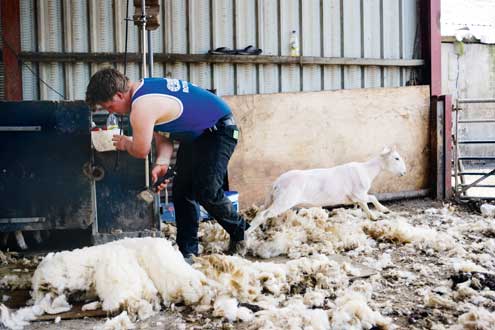 It is hoped this will be balanced by a repeat of the price rises the market saw during the summer of 2011, says Mark Powell, chief wool marketing officer at the British Wool Marketing Board (BWMB), which handles 30m kg of wool in Britain every year.

“This slight drop is hopefully just a blip. We hope prices this year will maintain levels seen last year with prices rising at the start of the new season in July, and there is no reason why this shouldn’t happen,” he adds.

“The main issue has been consumer confidence in Europe. And with what we’re seeing in the eurozone we’re going to need improved confidence going forward.”

A turbulent economic climate in Europe has largely been responsible for the drop in wool prices during the first half of 2012.

Lower orders of garments, yarn and fabric from Europe have resulted in a significant fall in production in manufacturing countries. This has particularly affected China, where 17% of British exported wool goes.

While the US has a greater demand for cotton, it is a growing consumer and manufacturer of wool products, and India has also begun to be seen as a major player in the wool industry in the last five to 10 years, adds Mr Powell.

“Overall, in the last 12 months we’ve had a good strong year and, with 22 auctions a year, there have been fluctuations in prices.”

The BWMB deals with 97-98% of British wool and pays farmers based on the average value at auction throughout the next year, giving them a proportion up front and the remainder in arrears.

Farmers can also choose to sell to wool merchants at a set price based on the current market value and receive payment on the day.

During the last 18 months, demand for natural coloured wool, particularly blacks and greys, has risen, but it will never realistically attract the same prices as pale wool and only represents roughly 2-3% of wool produced in Britain, adds Mr Powell.

Selective breeding can help eliminate issues in sheep with dark faces where dark coloured wool bleeds into the pale body, which can reduce fleece value.

The BWMB advises producers not to buy sheep that have been artificially discoloured and to consider whether sheep really need to be marked, as even a scouring mark applied in excess can result in wool being downgraded.

Fleeces should be rolled correctly and not tied with coloured cord or twine.

However, the biggest impact on fleece quality is usually the standard of shearing, says Aidan Walsh of Ireland-based wool merchant Texacloth, which buys wool from throughout the UK.

Shearing courses are available all over the UK and normally last two days. And while shearing and packing, it is important to keep fleeces clean, dry and contamination free.

“The wool we see is generally handled very well and we don’t see many quality issues,” said Mr Walsh.

“The biggest mistake a producer can make it to clip when wet. It can be tempting when a farmer is under a schedule, knowing that if it’s a wet day it might be three weeks before the shearer can come back, but under absolutely no circumstances should a sheep be clipped damp.”

Follow the NSA Sheep Event on our Sheep 2012 page