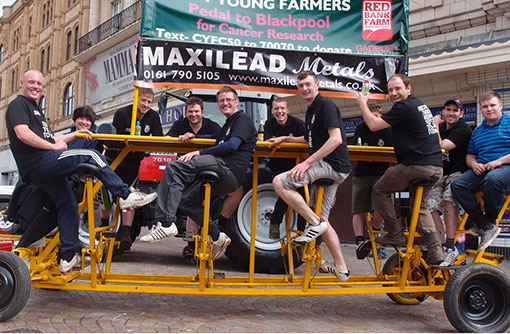 More than 5,000 people have descended on a bright and blustery Blackpool to kick off the three-day annual meeting of the Young Farmers’ Clubs.

Members from all over England and Wales headed to the Winter Gardens to register before getting ready for the opening evening’s black-tie bash.

Many proudly wore the colours of their club, but a few started the fancy dress early, with Hawaiian shirts, lycra leggings and onesies on show.

Some had caught early morning coaches, others had squeezed onto busy trains and a hardy few had even taken a more unusual route to raise cash for charity on the way.

Nine members of Lancashire club, Croft, cycled 45 miles to Blackpool, all piled on an extra large tandem bike they had built themselves over a month.

Their nine-hour ride raised about £600 for Cancer Research.

“It was nice on the downhills, but the hills were a killer,” said team member Craig Watkinson.