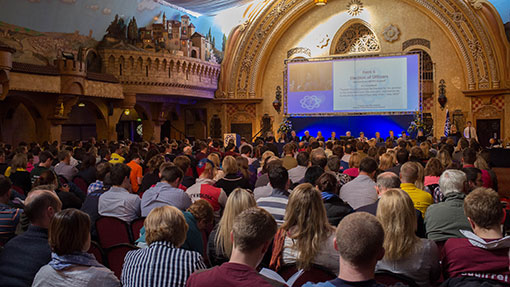 Young Farmers voted for a 20% rise on their annual levy to plug a hole in the National Federation of Young Farmers’ Clubs’ (NFYFC) finances at Blackpool AGM.

The rise of £2.27 a member on top of the current price of £11.36 passed with an overwhelming majority, following bids to increase the subscription being rejected at two previous AGMs.

Cumbria YFC’s Keith Forster, who proposed the motion, said while no one liked paying more the rise was needed as the NFYFC was receiving less income from its commercial arm, HOPS, which had operated the government’s now-ceased Seasonal Agricultural Workers’ Scheme .

“I believe the 20% levy rise is more than enough to make sure our federation can stand on a firm footing in the future,” he said.

Yorkshire’s Rachel Golding, who also bagged the Sidney Fawcett Trophy for the best contribution to the democratic proceedings of the AGM, supported the motion.

She said: “Last year I voted against the request for an increase. One year on, we have been provided with a full set of accounts and details and how the funds will be used to benefit us as members.”

Poul Christensen, who was reappointed for another year as NFYFC president, said he was impressed by the members’ decision to back the rise, even if it meant paying more. “If anything demonstrates a strong, healthy resilient organisation it is this,” he said.

“Last year I voted against the request for an increase. One year on, we have been provided with a full set of accounts and details and how the funds will be used to benefit us as members.”
Rachel Golding, Yorkshire YFC

Members also voted to increase the national levy for associate members from £5 to £6.

“It’s a difficult situation and as a council we are faced with some tough decisions to make,” a spokesman for the NFYFC had previously said.

“No one likes increasing the levy but we have to take action so the federation can keep delivering the services we love – such as the range of competitions currently offered.

“We know that the increase will affect certain counties more than others due to the way they set their own subscription fees. I want to work together with counties on this though so we can move forward as a united federation.”

Election of life vice-presidents and members