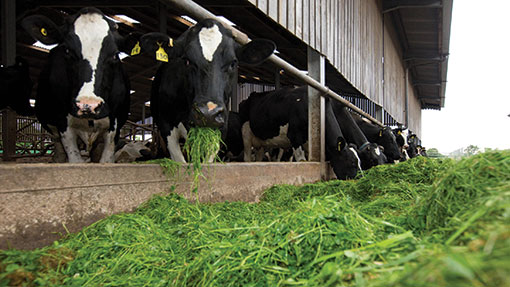 Zero grazing has helped save one dairy farm in south-west Scotland over £24,000 a year on concentrate feeds.

The 500 Holsteins at Coopon Carse Farm, Newton Stewart, have been indoors for the last 20 years on a total mixed ration (TMR) with silage, but increasing concentrate costs forced farm manager Alex Robertson to look at other options.

As the protein element of feed was most costly, the decision to feed fresh cut grass during the grazing season was made in 2011.

The farm consists of 266ha of grassland; 142ha is closed up for silage making and from the remaining acreage, 1ha is cut daily for feeding fresh cut grass.

Four silage cuts are made every six weeks, with zero-grazed land cut on a three- to four-week cycle.

Substituting silage with fresh grass between spring and autumn exploits the protein content of the sward. Mr Robertson says silage has about 7% less protein than grass, as it is used up during the fermentation process.

And with two forage wagons already on the farm for silaging, only a front mower was needed to switch to zero grazing.

“The non-conditioning front mower cuts and leaves the grass in a narrow strip so it’s easy to pick up by the forage wagon.

“It’s a bit more labour intensive but now we utilise the staff and machinery we already have, more efficiently.

“If we weren’t feeding fresh grass during the grazing season, more silage would have to be made to cover this period. The extra labour needed to zero graze is cancelled out by the time saved in having to make less silage,” says Mr Robertson.

The first cut of fresh grass was taken on 16 April this year, but this date varies depending on grass growth and ground conditions. In 2012, grass was fed for 112 days, but 2013 saw this increase to 139 days because of better weather.

“We can measure and adjust how much grass each cow gets with the PACE system on the mixer wagon. On a wet day for example, we have to put in more grass due to the lower DM, but we have a maximum of 33kg fresh grass,” says Mr Robertson.

He explains how the weather rules his feeding system: “West Scotland has high rainfall and if this is the case, we can’t get on the fields or we’ll damage the grass, so we change cows back to silage.

“If the weather’s good, we can feed more grass and make cost savings but we stick at 33kg fresh grass – one third of cows DM intake from forage – as any more could upset their digestion if we need to change back to full TMR with silage.”

Knowing the quality of the grass is vital to ensure the correct adjustments are made to the ration. A three-weekly analysis is carried out costing about £10.

“Grass sits at about 23% protein but DM can vary depending on the time of day the sample is taken. We also test for ME and digestibility. It allows us to balance the ration,” says Mr Robertson.

When adding 30kg of fresh grass, silage in the ration is cut by 10-12kg depending on moisture content. The following ingredients are also reduced; caustic wheat by 0.5kg, pre-mix (concentrates) by 0.75kg, molasses by 0.4kg and draught brewers grains by 1.75kg. Mr Robertson estimates that feeding fresh grass in the TMR for 112 days in 2012 saved £215 a day on bought-in feeds when milking 475 cows, totalling £24,080.

“We get most benefit from the system in April-May. We’re aiming at saving money on concentrates, but we also see a bit more milk in spring. As summer arrives, the value of grass decreases and we need to increase concentrates.”