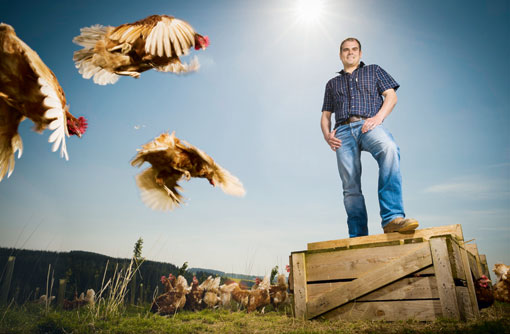 Bags of enthusiasm and a positive attitude about the farming industry is what the judges found when they visited our three finalists for Young Farmer of the Year. Isabel Davies explains what Craig Grant’s been doing to keep ahead.

Not every farmer can say they work out their figures to three decimal places, but it is second nature to Craig Grant.

He is a young man who through attention to detail and meticulous recording is seeing impressive business success. As he says: “Attention to small details makes all the difference with regards to profit at the end of the day.”

In just five years he has more than tripled the size of his and his family’s poultry business from 12,000 to 40,000 laying birds. In doing so, he has secured his place on the family farm allowing him to settle back in Scotland with his wife, Claire.

For 10 years Craig worked in the oil industry, travelling the world as an engineer and dreaming of the day he could return to the 290ha arable and pig farm run by his father and uncle near Fraserburgh in Aberdeenshire.

And in 2008 he got the opportunity he had been longing for. He and his family were offered the chance to supply free-range eggs to Morrisons supermarket through their local packing station Farmlay Eggs. It was new territory for them, but spurred on by Craig they went for it.

After researching the market, the family first invested in a 12,000-bird Big Dutchman multi-tier house which they gave Craig the chance to oversee. Five years later, he still runs it on a self-employed basis, along with another 12,000-bird Vencomatic house also owned by the family business.

He has also built his own 16,000 Big Dutchman bird multi-tier unit after securing a Rural Priorities grant in 2010. This third house is producing Natures Nest Eggs for Morrisons, which offer a premium of 2p/doz. It is generating enough profit that he hopes to have paid the shed off by the end of next year.

Craig, who is 30, is a great believer in using the science behind the birds to make the system work financially and is constantly tweaking the ration. He is conducting trials on two types of gut enhancers which have put each bird eight to 10 eggs ahead of annual target, while also reducing feed intake and therefore costs. Should the birds continue to produce ahead of target this is expected to add £20,000 to the bottom line.

His engineering background has also been used to improve efficiency.

For example, Craig realised that by modifying the speed of his egg belts he could halve the time taken to collect eggs. After other local farmers saw what he had done, five of them asked him to make the same modification to their own systems.

Working collaboratively with other poultry farmers in the area is something that Craig has been keen to embrace so they can all share knowledge. This collective approach has even extended to lending a hand at labour-intensive times such as when they are depleting birds from sheds.

“It is a job where you need a lot of hands, so we help each other out,” he says. “It started with a couple of us, but now there about 10.”

As a free-range producer, environmental considerations are important and Craig has planted new hedgerows and woodland close to his third house. Socially he does his bit too, playing an active role in Fraserburgh Discussion Group and welcoming people from the local community to the farm, so they get a better feel for the realities of food production.

Craig is ambitious about his future. There is talk among him and his fellow producers of paying for a TV advertising campaign in order to promote their eggs. He is also looking at buying land to enable him to build an enriched cage system on a new site.

He is man who is constantly seeking out new ideas and has the drive and professionalism to implement them. “If there is an opportunity there for the taking – then take it,” is his mantra. “And listen to all the advice you can – good and bad. It is down to your judgement how you use it.”