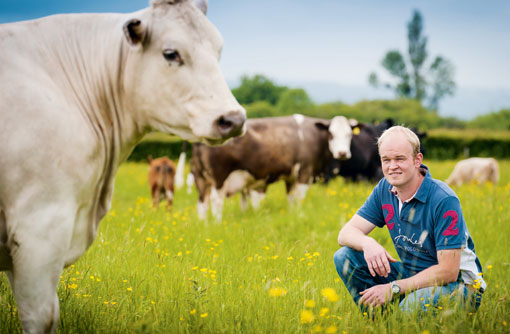 Bags of enthusiasm and a positive attitude about the farming industry is what the judges found when they visited our three finalists for Young Farmer of the Year. Isabel Davies explains what David Merrett’s been doing to keep ahead.

As the old saying goes, fortune favours the bold.

And David Merrett, 30, has been bold, seizing the chances he has been given and then shaping them to his best advantage, supported by his parents who both guide him and let him learn from his own mistakes.

David, who farms in partnership with his mother Janet and father Robert at Rectory Farm, Slimbridge, Gloucestershire, has a clear drive and passion for his farming future.

He has achieved considerable business growth in a relatively short period of time, having been at the heart of a move that has seen the family go from a 100ha farm in Devon, to a 300ha mixed unit in Gloucestershire.

The opportunity to move came in 2008, when his grandfather retired and David and his parents were offered the farm on a 25-year Farm Business Tenancy.

It was a chance that David grabbed with both hands and he has been growing the business ever since. From milking 60 Holsteins and finishing around 60 beef cattle in Devon, milking numbers now stand at 210 cows and overall stock numbers at 750, including the suckler herd.

Milk yields have also risen from 7,500 litres to 9,000 litres, with all milk sold to Cadbury via the supply group Selkley Vale.

To minimise disease risks the business rarely buys in cattle and makes use of sexed semen to get the replacements they need.

David has also established a fortnightly routine vet visit to maintain a close eye on the dairy herd. Calf mortality is low; last year out of 205 calves they lost only four.

Animal welfare is also an issue which is at the top of his agenda, and that of the farm’s staff.

Over the past four years, the family has embarked on an ambitious building programme to update their facilities to improve cow comfort and performance.

Since 2008 they have invested more than £340,000 in 26,000sq ft of buildings and equipment, which include a 140-cow sleep-and-feed cubicle shed, covered silage barn and a new milking parlour. This year, another 85-cow cubicle shed is going up. It is an investment that David reckons is future-proofing his business while also bringing immediate management benefits. “The new housing has helped us massively. The better ventilation has really helped to cut mastitis.”

All the building work has been financed from operating profits – a sign of the financial strength of the business. The level of rent agreed when they took the farm on reflects the level of investment on the family’s part.

David is a firm believer that as a young farmer he has a responsibility to engage with his local community. The farm has a number of footpaths running through it and he makes time to talk to walkers in order to explain what they are doing on the farm. He is also keen to invite other farmers to his see his farming setup and ways of working – hosting a series of grassland management meetings with DairyCo last year.

Farming environmentally is something that David has embraced, too. Part of the farm falls within the Slimbridge Wildfowl and Wetland Trust, so it is essential to work with the rangers to ensure that all the criteria for ELS and HLS are met.

He reckons the 40-cow spring calving Simmental cross suckler herd makes good use of the grass that he is unable to get the milking herd to and can’t be improved because it is ridge and furrow. Stores are sold in the autumn through Cirencester market, which gives the business a useful cash injection.

David has a passion for farming and views his investments in dairy housing, improved genetic merit of the herd and marketing his milk more profitably as the way to drive the business further forward. When asked what his business will look like in five years, David says “400 cows”. If you are visiting Slimbridge in 2017, that’s almost certainly what you’ll find.