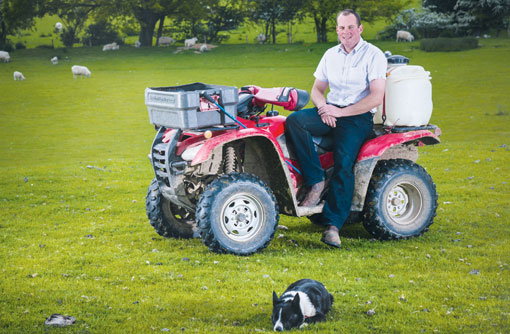 Bags of enthusiasm and a positive attitude about the farming industry is what the judges found when they visited our three finalists for Young Farmer of the Year. Isabel Davies explains what Edward Lovejoy’s been working toward on his farm.

Edward Lovejoy reckons his farm business is still in its infancy. But considering he started it just seven years ago with no land and only £15,000 of savings he has come an incredibly long way.

Farming in partnership with his wife Gemma in Woodchurch near Ashford in Kent, Edward is proof that even when the odds are stacked against you there are routes into farming for new entrants.

But it has required him to think a little differently, apply himself diligently and make the most of the valuable support he has been offered by his neighbouring farmers.

Edward, who is 29, is an inspirational figure for anyone wanting to get into farming, but without a family farm or farm tenancy available. He has built a diverse business that his bank describes as “very strong and successful”, with minimal borrowings and no single farm payment entitlements.

Today his business has three main enterprises. He has a sheep flock running about 400 ewes and also operates an expanding hay, haylage and straw business aimed at the equine market. Finally, he supplements his income with contract fencing and digging work which keeps him, his machinery and his full-time employee busy during quiet periods.
Today, even though he is constantly reinvesting, he is achieving profits of 20% of his turnover and is growing at a sustainable rate.

“Seven years ago many a farmer told me it is impossible nowadays for someone to start farming from scratch. I set out to prove them wrong and that is exactly what I am doing.”
Edward Lovejoy

All of the land he farms – 105ha of permanent pasture – is on yearly agreements only, spread across a handful of landlords, and he takes another 120ha in winter keep. Much of this ground is in environmental agreements, so he has to farm in line with these schemes. But he has secured enough ground within a seven-mile radius of his home to make his business work.
Edward admits that his life is somewhat different to what he expected when he left Plumpton College in 2003.
At that point he had presumed he would get involved in the family farm in Sussex run by his uncle and father. When they decided to sell up and retire, it meant it was back to the drawing board.

But a trip to New Zealand with Gemma made him believe his dream of being a farmer was still possible. With his fire re-ignited he returned to the UK and started providing contract labour. Despite sheep prices being on the floor, he also bought his first breeding sheep.

“People told me I was nuts,” he says. “But I really felt there was going to be a shortfall in lamb, and going in when prices were low enabled us to establish a flock.”

Today, his 400 ewes are mainly Romney or Suffolk cross Romneys producing breeding replacements and quality meat lambs. The rest are a 55-ewe flock of pedigree Poll Dorsets, some of which are bred pure and the rest crossed with a Texel or Beltex to produce lambs for the early Easter trade. A small number of Texel cross Romney ewes form the rest of the flock, which are finished for the Christmas fatstock shows, demonstrating to buyers that the business can produce quality lambs throughout the year.

Edward works half a day a week at Ashford market, which keeps him on top of market trends and in regular contact with potential customers for his contract services.

His friendly nature along with his honesty and integrity is clearly a part of his success. By informally “networking” he can sell his services and you get the sense that local farmers are keen to see him succeed.

The support he has been offered is something he would like to offer to others in his position. He has already been asked to talk to college students and he hopes that one day he will be able to give another young farmer the chance to enter a share farming agreement.

He knows what can be done with hard work, determination and a little bit of support. “Seven years ago many a farmer told me it is impossible nowadays for someone to start farming from scratch. I set out to prove them wrong and that is exactly what I am doing.”