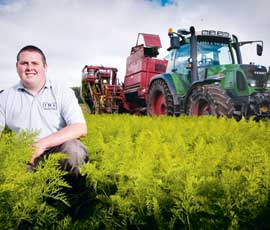 Taking home a Farmers Weekly Award brings with it all kinds of personal and business benefits, but you don’t have to lift the trophy to win.

In 2010 at the tender age of 23, Alastair Wilson (main picture) was shortlisted in the Farmworker of the Year category for his outstanding work in his family’s vegetable growing and packing business. Although he didn’t pick up award on the night, he’s still feeling the benefits two years on.

“We don’t like to blow our own trumpet in this industry, I’m quite reserved and I don’t like to boast about my achievements and when I was first nominated I just thought ‘It’s my job – I don’t think I’m a superstar and there are plenty of other people who do a good job. But when I got the call to say I was in the final three it was a bit of a buzz and I started to get really excited about it.

“It’s given me stacks of confidence,” he added. “I’ve had people coming up to me when I’m out buying seeds or machinery saying ‘oh I saw you in the Farmers Weekly’, which is great recognition for me and the family business.”

Just as important as the personal publicity was the wider publicity for Alastair’s industry, his region and his profession.

“Getting my name into the final three was also great recognition for the UK veg growing industry, especially in my area. Not many nominations came from the North West of England so I really felt like I was representing Lancashire and Merseyside.

“The year I entered was the first year they introduced the Farmworker category, so I also felt it gave a lot of recognition to the workers and labourers who are an integral part of the farm. I’m not a director, I’m a worker, but without the bottom rung the top rung would struggle.” 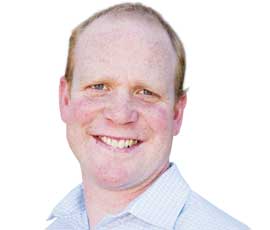 Antony Pearce also reached the shortlist in the 2010 Awards, thanks to his precise financial management of two arable and sheep enterprises in Buckinghamshire and Oxfordshire. Being a finalist in the Young Farmer of the Year category undoubtedly raised his profile (and secured him some more public speaking engagements to boot) but it was the awards process itself that had the biggest impact on his business – starting with the entry form.

“Filling out the initial questionnaire really makes you question what you’re doing. It’s very easy in agriculture to get stuck in a tunnel of your own problems and solutions, but when you’re writing it all down it helps you look at your business more objectively. It makes you think, ‘is it just about getting more litres per cow, or why I’m trying to get more litres per cow’?”

“Plus, when you sit down and try to explain to other people exactly what you’re trying to achieve, sometimes it helps you identify a solution. For me it made me realize quite what an issue blackgrass had become on my farm. As a result I changed my focus from simply maximizing yields, to beating blackgrass. It’s definitely a war, not a battle, but we’re making progress.” 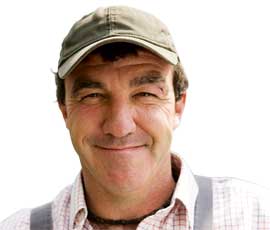 Andy Fussell, a past finalist for Diversification Farmer of the Year, doesn’t have a Farmers Weekly trophy on his mantelpiece, but credits the experience with helping to build a reputation as the “go-to man” for all things rapeseed oil.

The Somerset farmer got chosen over three or four other producers to speak to Chris Evans on BBC Radio 2 for a slot about rapeseed oil, and is “absolutely sure” that being a Farmers Weekly Awards finalist played a part.

“Entering the Farmers Weekly Awards gets you seen, especially if you get whittled down to the final three,” he said.

“Having this kind of achievement to your name gives you credibility. It gives you a bit of clout when you come to talk to people and it gives you or your PR team an angle to talk about your business and your products.

“And if you do get shortlisted, you have that forever.”