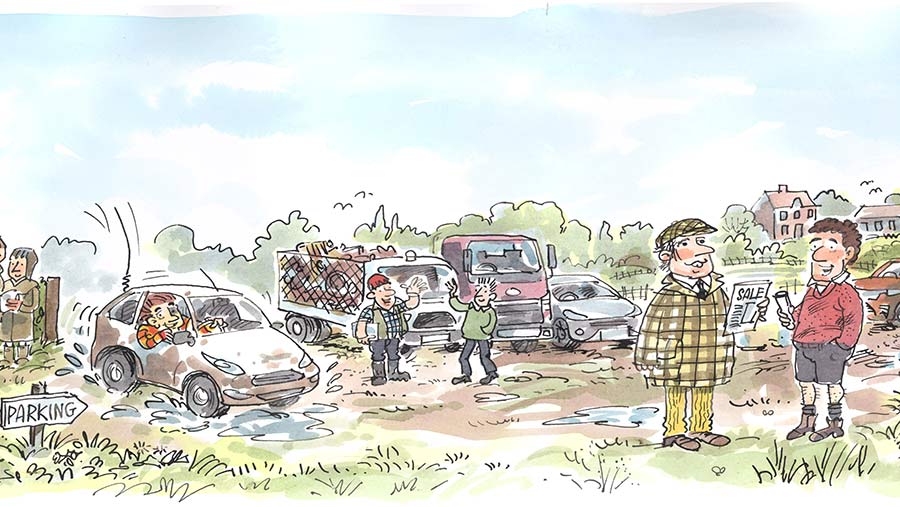 Even the most experienced agricultural adviser can be caught out when livestock attacks, interested parties are behind bars and vehicles pose a challenge.

You could have all the necessary training and qualifications, a farming background, and a bag (or car) full of tricks, and still get tripped up by a question out of left-field.

Farmers Weekly asked industry experts about their most memorable buyers, farm visits and queries, as well as their top tips and the key skills needed for their job.

See also: 9 of the funniest life lessons from working in farming 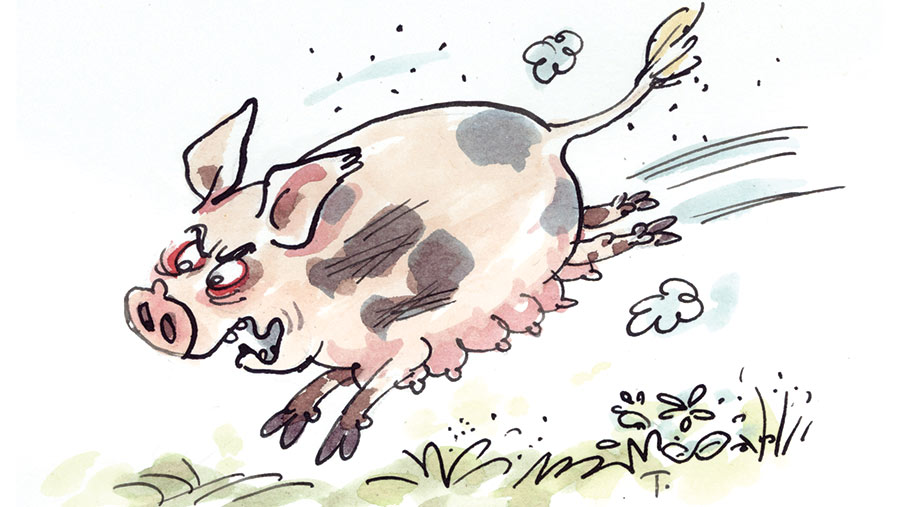 Earlier this year I was instructed by a client to help him buy a livestock farm.

On entering the farmyard I was greeted by a host of small piglets running towards my car and I thought under, though thankfully not. Odd – there was no mention of pigs in the sales brochure.

When I was standing in the hallway of the house, talking to the vendor, I noticed his eyes were diverted over my left shoulder.

There was nothing more he could do than step aside and watch my legs being taken out from under me as a large, grumpy sow came hurtling from the kitchen, through the hall, through me and out of the front door.

After I had picked myself up and tried to recover my composure, I did look at the rest of the house, but not in a favourable light.

My client did not buy the farm! 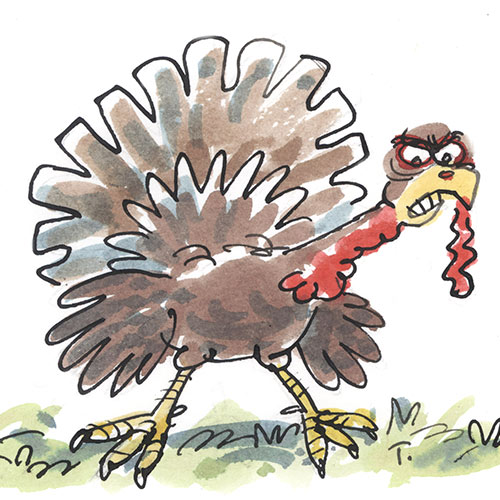 We were selling a farm for a farmer who had a very large turkey, which had dodged the Christmas pot and had taken up residency as guard dog.

Every time I went to conduct a viewing it puffed itself up and hissed at me and followed me around, so I had taken to carrying a large golf umbrella just in case.

When I was showing a family round the garden the turkey decided to make a full-on attack on the viewers. It pecked and tried to bite the gentleman who was viewing and he had to fend it off by getting quite physical!

One gentleman wrote to us from his cell in HMP Wakefield to ask us for a set of property particulars. He assured us that his current address was merely temporary and that he would like to arrange a viewing as soon as possible once he was released.

We were also contacted over the phone by a French lady who spoke very little English – or so we thought.

When our managing partner offered to translate for her, we discovered she did not speak a word of French either.

It turned out she was wanted by Interpol on various charges of fraud and had adopted the false identity to cover her tracks in pursuit of her dream home.

I have been asked during a valuation visit whether the 70 acres of land in question could be advertised as 100 acres.

The client’s reasoning was that if you included the vertical faces of the cliffs on the land then the total surface area would technically make up the remaining 30 acres.

Key skill: Ed Fletcher, one of our rural graduates, perfected a little-known skill of his when tasked with arranging several large displays of fresh flowers for our stand before an agricultural show.

During my first few years as a land agent, I went to visit a client and was in a bit of a rush. The traffic and weather had been atrocious so it had taken me longer to get there than anticipated.

When I arrived I ran to the house and sat down at the kitchen table, fortunately facing the window – when I glanced out of the window I saw my car sliding backwards.

I ran out to try and stop it, but didn’t make it in time. Thankfully a fence stopped it from falling down a 40ft drop!

I was involved in the sale of a farm on the Lincolnshire Wolds in the early 2000s and went to do a viewing with an Irish farmer – let’s call him Neil – and his son.

My car was in for a service so I reluctantly borrowed my husband’s rather flash bright blue VW Golf R32 for the day. It was the sort of car that attracted admiring looks from spotty youths outside burger bars.

When we had exhausted our discussion on the farm, Neil turned to me with a big smile and said that he was very interested in making an offer.

Then he said: “My son here is very taken with your car. We’d like to make an offer on the farm, but can you throw the car in as part of the deal?”

I won’t say that I wasn’t tempted – close the deal and get rid of the car! But in the end I put my marriage before the sale and drove the car home to its adoring owner. We sold the farm – but not to Neil.

Key skill: Loo hunting. Public conveniences are few and far between in the countryside. Female agents tend to learn the location of every suitable loo in their patch and never pass up the opportunity to use one when it’s available.

Top tip: You can never have too many pairs of wellies. Keep a particularly old and rough-looking pair for wearing at rent reviews. This tip applies whether you act for the landlord or the tenant, but is less effective if you climb out of a brand new Discovery wearing them.

Only at a machinery auction…

A British gent with money coming from the Far East insisting on viewing a large arable farm on a Sunday morning.

He turned up in a brand new tweed suit and highly polished shoes, and insisted on walking down a steep slope to view the river but unfortunately he slipped, sped past me on his backside and disappeared into the river below.

Once we got him out, his enthusiasm for the rural life had waned a little.

Key skill: Defuse any frustration from a client with a smile – it’s amazing how disarming it can be – or use a light touch anecdote or change the subject.

Top tip: Learn to trust (or not) by watching the eyes, it’s amazing what you can learn through eye contact.

While showing a wealthy buyer from overseas around a large country house set in 200 acres, we’d looked around the Jacobean mansion complete with roaring fires and stepped outside on to the terrace before walking around the garden.

At this point the buyer looked aghast and asked me what the white stuff on the ground was. I looked at her for a moment, decided that this was a genuine question, and explained that it was frost.

The estate manager slipped off into the bushes not able to keep a straight face. Later in the office there was much debate as to what my buyer thought the white powdery layer of frost on the garden could have been.

Key skill: Take all questions seriously however ridiculous they may seem.

While organising farm lettings, we always get one or two dreamers who turn up on the viewing days.

A couple of years ago at a farm I was approached by a young man. He was asking all the right questions and the conversation was going well. He then started to talk about what machinery he would require to take on the farm.

At first I thought he was talking about likely purchases he would need to make but it soon transpired that he was giving me a shopping list expecting that the landlord would magically make his extensive wish list of farm machinery appear.

He rapidly lost interest when it was explained to him how farm tenancies work.

Key skill: Being a land agent is a lot like being a priest – dispense sage advice, tend to your flock and occasionally act as a confessional.

Top tip: Always have a spare change of clothes in the car. The number of times I have been caught out by inclement weather or an unexpected yomp across a ploughed field has taught me the value of a stash of clean, dry clothes.

Top tip: If you have seen a distraught lady running across fields in the North East, it was probably me chasing paperwork. Number one tip: invest in a clipboard, more specifically, one that is weatherproof.

Writing on soggy paper soon results in reading hieroglyphics once you are back in the office.

Don’t leave with more than you came with

Top tip: Always check for unexpected guests. I went to look at a farm in Lincolnshire for a client to buy.

I pulled off my boots and left the boot of my car open, then went into the house and had quite a long conversation with the sellers before saying my goodbyes, closing the boot and heading off.

About five miles down the road I looked in my rear view mirror and noticed that their cat was sat in the back seat looking straight back at me – it must have jumped into the warm car for a sleep while I was indoors.

I drove back to the farm entrance, making sure nobody saw me and let the cat out (literally).

5 top tips for anyone wanting to be an agricultural consultant