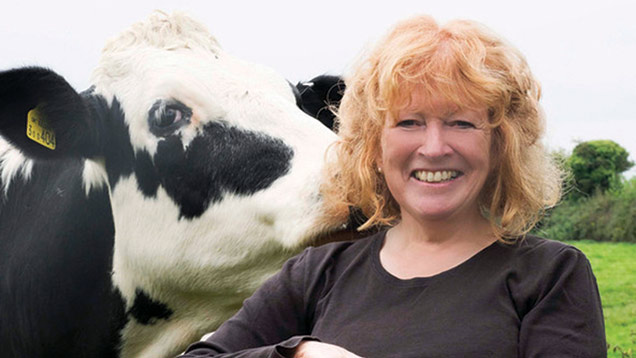 Mary Griese had long thought about producing an alphabet book, but the arrival of four-year-old Charlie and one year-old Molly was the final incentive to get her easel out.

“I’d had the idea for a very long time,” recalls Mary, who works in watercolours. “But becoming a grandmother and not being able to find an alphabet book with an agricultural theme was the push I needed to get on with it.”

The book is more than a simple “A, B, C” and will doubtless go on to be something of an heirloom among farming families with its 56 beautifully illustrated pages and ribbon bookmark.

Readers may well recognise 64-year-old Mary, who works from home in Somerset’s Chew Valley, from the many agricultural shows she has attended over the years with her greetings card business Slightly Sheepish.

In fact, almost 30 years ago Farmers Weekly featured the then-sheep farmer’s wife and the farm animal-themed cards she was selling.

Mary had to get used to the routines of a dairy farm when moving in with her new partner, Michael Weaver, 12 years ago although they recently finished milking and opened a campsite and bunkhouse for holidaymakers. There’s still livestock on the farm, with a move into breeding replacement heifers.

“I’m not from a farming family – my father was an artist like me – so my friends smile that I ended up with a farmer again.”

Mary has been working on this latest, ambitious artistic project for two years. There is a Hereford on the hardback cover, and she suddenly thought: “There’s a foreign Holstein under H – I’d best put something more traditionally British on the cover.”

Each picture, meanwhile, has a line or two of text on the opposite page.

“Because of all the children I’ve met over the years on my stands at agricultural shows, I’m used to the very young from farming families being able to recognise different sheep and cattle breeds. They are way too clever just to have say P for pig.

“I’ve included adjectives for each animal, some complicated and a few quirky – which should hopefully appeal to older children.

“My most recent order was for a farming-mad, young grandson with no interest in school. It was bought in the hope that because it’s about a subject he’s interested in it will encourage him with reading and spellings.

“Funnily enough, though, I’ve also had an order from a friend who’s 91 – as a treat for herself – so it’s fair to say that it’s suitable for a wide age range.”

All of the animals featured are painted from real livestock. “Some are ours,” says Mary, “others belong to friends or are animals that have caught my eye at shows such as the Royal Welsh.”

Mary, who went to work on a farm – coincidentally for Michael’s aunt – to help milk Guernseys in 1965 at the age of 15, painted the book at random, rather than starting at A and working her way through in alphabetical order.

“It meant I could work on what inspired me at the time, rather than ploughing through in a rigid way.

“It was a welcome change to paint for myself rather than to a restrictive commission.

“Needless to say, I was grateful for the import of Zwartbles sheep!

“Queen bee was a slight deviation (I’d originally considered Quail), but then thought bees are paramount to our existence, so my Q is ‘quirky Queen bee in quad queue’.”

Sheep remain Mary’s favourite agricultural animal. “Although I’m fond of the dairy cattle and have enjoyed rearing calves over the years, my real love is sheep – and, of course, working collies. There is nothing like sending a couple of good dogs out to work, whatever the weather.”

The book, which will be published at the end of November, is priced at £25 and comes in a box with a ribbon bookmark.

Mary’s grandson Charlie appears against the letter D; he is the little boy holding the ‘darling Donkey’.

“It was lovely to see his face light-up when he realised it was him in the picture,” recalls Mary, who is selling the book herself.