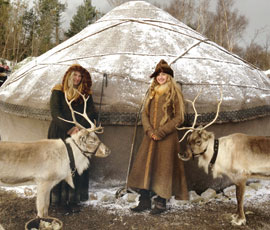 The real stars of the big and small screen can sometimes have four legs not two, as Kate Chapman reports

Many of our best-loved movies and television shows feature farm and countryside animals, either in the background or taking centre stage.

Such creatures aren’t, however, just plucked from a field and transported to a studio. Far from it – it takes an enormous amount of training – not to mention consideration of issues surrounding health and safety, transportation regulations and animal welfare – before they can set a hoof, wing or paw in front of the camera.

Each animal has its own handler; vets are present on set too. In many instances, after several days, even weeks, on set, their fame can be limited to just a few seconds in the finished production. And that’s if their appearance isn’t cut completely.

But for some farmers and rural businesses, hiring out livestock as extras for film, TV and advertising campaigns can be another valuable source of income.

For many it’s a part-time venture, run alongside businesses such as mobile petting farms and hiring animals for weddings, Christmas fetes and other events. There are also specialised companies that source animals for screen appearances and publicity work.

Animal trainer Charlotte Anderson-Dixon, of Derbyshire-based The Animal Co, owns many of the animals she hires out. She keeps pigs, goats, chickens, camels and reindeer, and is also able to source many others through a network of animal experts across the country.

Her animals have appeared in TV shows such as Never Mind the Buzzcocks and with comedian Jack Dee, while more recently her reindeer featured in the blockbuster movie Les Miserables.

“It was filmed at Pinewood Studios in London,” says Charlotte. “The reindeer were just basically standing with the sleigh and Father Christmas in a scene featuring Helena Bonham-Carter and Sacha Baron Cohen. “We were there for several weeks just to produce a few seconds on screen.

“This didn’t really involve a lot of training, but there are instances where the animals are required to do something more unusual.

“The pigs that featured on the Jack Dee Show had to jump in and out of a car – we tend to find animals will do anything for food!”, she adds.

Many of Charlotte’s animals go out as part of a petting farm for long periods of time, which she says helps get them used to unusual situations and being surrounded by the general public.

Zoologist James McKay, director of Honeybank, a conservation and study centre in Derbyshire that is home to several different animal-related businesses, says having the right temperament is also a must when it comes to putting animals in front of the camera.

With more than a hundred species of animal available for hire, ranging from a colony of leafcutter ants to a herd of cows, Honeybank most famously supplied the owls used in the Harry Potter franchise.

As well as big-screen appearances, the centre also works with students who are making their first films featuring animals, so they can get some valuable experience.

“We train all our animals from day one; obedience is the key,” says James. “They come to their name, stand still and things like that.

“With our horses, they all have to be rideable, they are all used to handling, to noise and moving around, all the things filming brings.”

But whatever the project, animal welfare is top of the agenda for James, a former chief executive of the UK’s National Federation of Zoos and a renowned animal trainer.

“You have got to be careful with animals,” he adds. “We have strict code of conduct of what we will and will not allow them to do.

“If we’re asked for something that will put an animal at risk, we will not do it, and we don’t use the same animal day after day, they must have a break.

“And, if, for example, we had been going to be filming with the lambs when it snowed, we would not have gone ahead – and all this is in our contract.”

In many instances, production companies require particular, or more unusual breeds, to portray those that would have been around in specific or historical time periods.

The Cotswold Farm Park in Gloucestshire, owned by Adam Henson, champions rare breeds and is often contacted for help on these occasions.

“In lots of cases they don’t want standard white commercial sheep,” explains livestock manager Mike Caunter. “They want something to reflect a certain time period or what we perceive would suit a particular period – like older, brown sheep.”

The farm’s first request was back in the early 1970s, for a pig to fit the iron age period. Adam’s dad Joe, who ran it at the time, ended up crossing one of his Tamworth sows with a wild boar from London Zoo to solve the problem.

Since then, their animals have made several high-profile appearances, featuring in Braveheart, the big-screen version of Robin Hood starring Russell Crowe and most recently the new Sky series Da Vinci’s Demons.

“In some instances they’re just in the background – this is known as set dressing,” Mike adds. “In Robin Hood, for example, there were geese running around, sheep in a pen and someone walking around carrying a goose.

“But in cases where they’re required to do something specific, there can be a lot of training to do beforehand. In Da Vinci’s Demons we had two cows pulling a cart in one scene, which we spent two days filming in Swansea.

“Every day, for several months beforehand, these two heifers were trained to pull a cart. It had a wooden frame with a couple of small ‘x’ markers on it, which were used for editing in the programme, as it was supposed to be carrying fireworks.

“It was all filmed against a blue screen – it was very interesting to watch, as we didn’t know what we were going to see on the screen when it was all finished.”

Transporting the animals to and from set is another area involving a great deal of behind-the-scenes work.

“They have to travel in animal transporters, we have to fully comply with health and safety, DEFRA rules and regulations and fill out animal movement licences,” says animal trainer Jackie Rowberry.

“Local councils have to be informed, along with animal health, and there is a lot of paperwork prior to travel, plus we have to rest for 28 hours if we have a long day.”

With more than 35 years’ experience working with animals under her belt, Jackie runs Animal Dramatics in Berkshire, where she keeps a small selection of creatures including sheep, ponies, goats, cats and dogs.

She has access to other animals for hire throughout the country and has supplied many of the nation’s favourite shows with four-legged extras, including Midsomer Murders, French and Saunders, Doc Martin and Coronation Street, as well as the recent Snow White and the Huntsman movie. Jackie also hires out animals for fetes, weddings and children’s parties.

A descendent of William Kite, who had his own circus and toured with the famous Sanger Circus during the 1800s, Jackie says working with animals is in her blood.

“All my animals I have from babies, and they are hand-reared. We also supply to the corporate market, so in the early days, they get handled well by children and this gives them a solid, firm start.

“Travelling to bookings in the early days helps them get used to being transported, too, and when they are older it just becomes part of everyday life. In fact, if any get out when we are on location they just run straight to the trailer.”

When it comes to making a living, Jackie says it costs in the region of £200 a day to hire a prop animal to feature in the background. This includes a handler, travel and insurance, while for a creature required to take part in the action the cost rises to around £500 a day.

“We get the odd one who’s a bit mischievous, but on the whole they’re very well-behaved,” Charlotte adds.

So perhaps when comedian WC Fields famously said: “Never work with children or animals,” he was only half right.