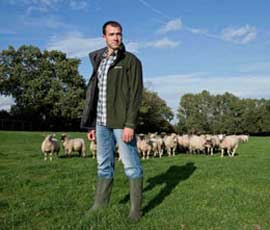 Young farming talent will go head-to-head in a TV show later this month designed to find the BBC Young Farmer of the Year.

The programme, which will air on Sunday February 26 at 8pm on BBC 3, is part of the Young Talent series, showcasing ambitious youngsters in various professions – from bakers to tailors.

The hundreds of initial applicants were whittled down to four, who were put through their paces in a Suffolk farm.

They faced various paper-based and practical challenges in a bid to explore their abilities.

Some tasks were physically challenging, others were psychologically testing – including one called “the grill”, says 32-year-old judge Dave Finkle, who works as farm manager at Jimmy Doherty’s farm.

“It was like being in the army,” says David. “For the final itself, we had the farming day from hell.”

As well as its entertainment value, the show has a serious side, he points out.

“What I like about the concept is that it celebrates silent working heroes – farmers.

“All too often people take it for granted that food appears on their plates. This shows what farmers have had to do to get it there. It shows how difficult their job is – and celebrates their achievements.

“There’s a lot of negative press about the youth of today; this shows people who are passionate about their industry.”