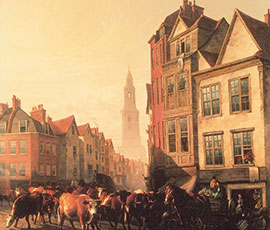 It’s highly unlikely a trip to London today would involve a near-escape from a rampaging bull or a bolting horse, but if you’d visited Smithfield Club Cattle Show in the early 1840s you would have certainly encountered animals on the capital’s streets – in fact, hundreds of them.

The city was once alive with animal sights, sounds and smells: neighing horses, trumpeting elephants and chattering starlings, alongside chained dancing bears and stray cats galore. For many of them it was hell on earth, but today it is easy to forget how all these animals helped to shape the very nature of London.

Most numerous of all animals was livestock, either coming into London for sale or being reared and kept in backyards, cellars and urban cow-sheds.

Before the advent of railways, livestock arrived on the hoof to provide a steady supply of meat, hides and viscera for the growing population, and all roads led to Smithfield Market (and Leadenhall Market for poultry and game).

Smithfield, once in the suburbs, was by 1840 in the shadow of St Paul’s Cathedral and was neighboured by St Bartholomew’s Hospital. London was the only city in Europe (and probably the world) that had a livestock market and thousands of slaughterhouses, triperies, bone-boiling houses and gut-scraperies at its centre – in a time before hygiene regulations. Can you image the filth and stench of living so close to animals?

In the market’s last year of trading, in 1853, more than 277,000 cattle and 1.6 million sheep passed through the six-acre site and to reach Smithfield these animals were driven through the streets. The newspapers regularly reported pedestrians gored and trampled by cattle, and glazed shop-fronts being routinely smashed.

As a farmer in the early 1840s, sending animals to London was not hard work (your salesman employed drovers to walk them on the often ludicrously long journey), but the financial costs could be great. The sellers and drovers (and their Smithfield brethren) took a cut and animals had to be fattened on pasture outside London before sale because of weight lost during the journey. After their trip through Smithfield, animals would be unrecognizable as those which left the farm gate. They would be terrified, exhausted, mad with thirst and cowed by the violence of the drovers, who had to negotiate a way through the packed streets and cramped market.

No attempt was made to shield Londoners’ eyes from animal death in the slaughterhouses, and the methods used were said to be “objectionable and repulsive”. Despite centuries of complaints against slaughtering in the streets, the last London slaughterhouse wasn’t removed until 1927.

It surprised me, initially, to think that Londoners lived in such close proximity to livestock, but breeding and rearing animals was a way for those living in the poorer areas of London to survive. It was routine to find hens and rabbits in coops and hutches made of soap boxes; and sheep-folds, cattle-stalls and pigsties above and below ground, in and out of dwellings and on the streets.

Pigs were either kept on a commercial scale in the backyards of distillers or starchmakers, where they lived on the factories’ by-products, or in places such as the Potteries in Nottingdale (now Notting Hill). The mainly Irish inhabitants lived side-by-side with their companion pig, which was referred to as the “jintleman who pays the rint”. In 1849, when cholera swept through the area, the health inspectors found 3,000 pigs being looked after by 1,000 people, living in 250 hovels over eight acres. And dominating the Potteries was a lake of stagnant water called “the Ocean” which was, “a receptacle for dead animals and filth of all descriptions, and into which the adjacent piggeries and privies have been drained for the last 20 years”.

While the pigs probably revelled in their London homes, urban cows (and milch asses) had a more torrid time. In 1850 there were 20,000 dairy cows in the capital, housed in cowsheds across London, and that year a pamphlet called Observations on London Milk &c. uncovered the real nature of the milk sold on the streets. The cows were fed on brewers’ grains and distillers’ wash which stimulated milk production, but ravaged their bodies (ulcerated gums, stiffened joints and bloated stomachs) and the milk was so thin and bluish looking that it had to be adulterated to give it a richer colour and texture… molasses, water, whiting and sheep brains would be added. Pleuro-pneumonia, foot-and-mouth and cattle plague were also rife in London, because of the numbers of foreign cattle arriving at the London dockyards.

I would suspect that Londoners and livestock alike breathed a huge sigh of collected relief when the railways brought in all the meat and milk that was demanded, essentially wiping out a livestock industry that had shaped London for centuries.

Today there are occasionally sheep driven across London Bridge by City Freemen, but Smithfield Show has left its spiritual home and there are only a few reminders of London’s livestock history, such as the medieval street names that survive, Milk Street and Poultry.

With Beastly London, I wanted to leave a tribute to those London animals that time has forgotten… and to in some way apologise for their treatment. I hope I succeeded.