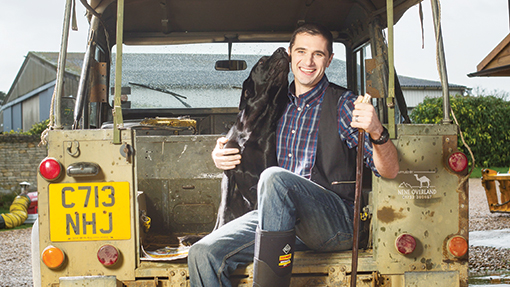 Asked how he reacted to making the shortlist, Glastonbury pig farmer Graeme says: “With shock and awe”.

The 31-year-old dad-of-two – who describes himself as “a bit of a joker, a hard worker and quite shy behind the outgoing and confident persona” – was nominated by his wife, Samantha.

She did it for a bit of fun, but Graeme was soon gathering votes – not to mention getting “plenty of ribbing” from friends.

“I didn’t think at any point I was going to win,” says Graeme, whose family pig unit has 380 sows and 4,000 fatteners. “I’m becoming quite the local celeb!” he laughs.

He studied a photography-related course at uni then, after a spell travelling, worked as a photographer and did some teaching before going back full-time to the farm about five years ago.

“I love it. You can’t beat farming. It’s so rewarding – especially seeing the livestock coming through.”

He’s involved in all aspects of the business, but combines his creativity and practical skills to particularly good effect when it comes to building work and welding. “I like creating stuff out of steel – making something that lasts forever.”

1. Last book you read? On the Road by Jack Kerouac.

4. What makes you angry? Not doing a job properly. My motto is: Do it once, do it properly.

Have you seen the smile on this boy? It could melt a thousand hearts.

But don’t forget those killer eyes and strong brows, which anyone would love to meet across a crowded… milking parlour.

Definitely a man with a rugged charisma and that boy-next-door charm, which makes the gals weak at the knees.

Oh, and look at those muscles and lovely forearms – he looks like he could throw a bale or two around!

Graeme’s optimistic about the future of agriculture and plans to use his new-found fame to bang the drum for farming – particularly the importance of the public buying British.“I’d love to see British consumers being a bit more patriotic, like in France,” he says. “We are a country that’s based on farmers. As a nation, we need to look after our farmers – after all, we’re feeding the country.”

As for his advice for youngsters considering agriculture as a career. “Get as much experience as possible and learn how to weld. If you can weld, you’re invaluable to any farmer.”

Meanwhile, proud wife Samantha points out: “What the hundreds of thousands of visitors to the biggest music festival in Europe don’t know is that grafting in the quiet fields neighbouring Glastonbury is Britain’s sexiest farmer.

“He stands out from the crowd with his 6ft 3in frame and dark hair, uses his piercing blue eyes to spot machinery faults, applies his muscular physique to building barns, and works long hours to ensure all the animals’ needs are met.

“Above all, he is an inspiration to his son, who loves nothing more than spending time with his daddy.”

The Original Muck Boot Company has been meeting the needs of the farming community for more than 14 years, helping people working outdoors keep dry, warm and comfortable in the harshest of conditions.

That’s why it has supported the search for Britain’s Sexiest Farmer.

“Farming is a dynamic and vibrant industry and it’s time to showcase the stylish and sexy people we have in our rural communities,” says the company.