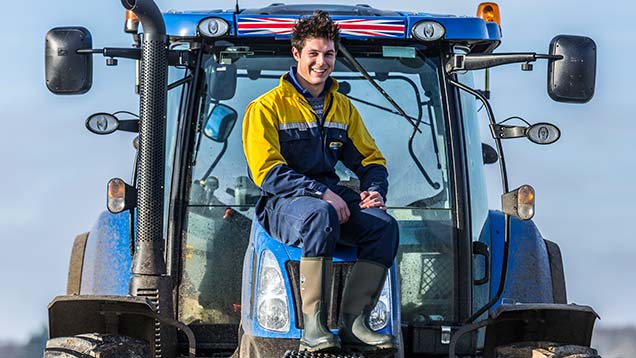 1. He works on the family farm

George, known to many as “Granty”, is an arable lad, farming with his dad near Market Rasen. Alongside their own arable business, they contract-farm sugar beet.

2. He has a diploma in agriculture

George spent two years studying at Riseholme College for a Level 3 diploma. When he was at college, he would spend his weekends milking at former livestock Farmer Focus writer Tom Rawson’s dairy farm, so this is not George’s first mention in Farmers Weekly.

3. He started helping with harvest at an early age

“One of my earliest memories is spending days on the sugar beet harvester with Dad. We’d be out from 6am til 6pm some days. I used to mould mud into shapes and look out for any red beet, which I’d then jump out and pick up. When I got tired, I would curl up on the floor, a bit like a dog, because there was a heater under Dad’s seat.”

4. He likes to keep active off the farm as well

In his spare time, George is a regular at the gym and Wragby YFC gatherings. He’s a big fan of rugby and used to be a flanker or a hooker in his local team, but more recently has begun horse riding under the tuition of girlfriend Lucy.

…were the names of George’s dairy bull calves – his first venture into livestock rearing. The five animals were more of a hobby, but George did sell them as stores at nine months old and made a small profit. “They were good fun, real characters. Martin was named after rugby player Martin Johnson because he was so big when he was born. I enjoyed working on the dairy farm and I like working with stock, so it’s not something I would rule out for the future.”

6. He enjoys rebuilding and repairing machinery

The workshop is one of George’s favourite places on the farm, so long as it’s not too cold. It’s perhaps a trait he has picked up from his 84-year-old great uncle, who lives on the farm and restores vintage tractors.

7. He is not a fan of the chainsaw

“Dad loves it and gets carried away, so a 30-minute job can sometimes turn into a day of chainsawing.”

8. He co-owns a boat called ‘Kuboata’

On his last day of college, a merry George and five friends decided to look on eBay to find a boat they could take out on the river at the weekends. They thought they had a real bargain when they “won” a 16ft cabin cruiser with the highest bid of £400. Until they realised it didn’t have an engine. The boat, now with a new engine, has been lovingly restored in George’s workshop and painted in Kubota orange and grey, hence the name Kuboata.

9. His tipple of choice is a pint of Stella

And his favourite meal is chip-shop chips and chicken-and-mushroom pie. “It’s a bit of a tradition in our family. Every Saturday we get dinner from the same chip shop. They usually save me a pie if they’re running low.” George’s ideal weekend would be spent at the YFC AGM, or on the River Witham in Kuboata.

10. He loves what he does and would recommend it

“It is different every single day. And even when you’re doing the same job, something about it will be different.” George says he cannot see himself working in any other industry. “I couldn’t sit in an office. I like to see what’s going on outside and I like the changes throughout the year, the variety of seasonal work.”