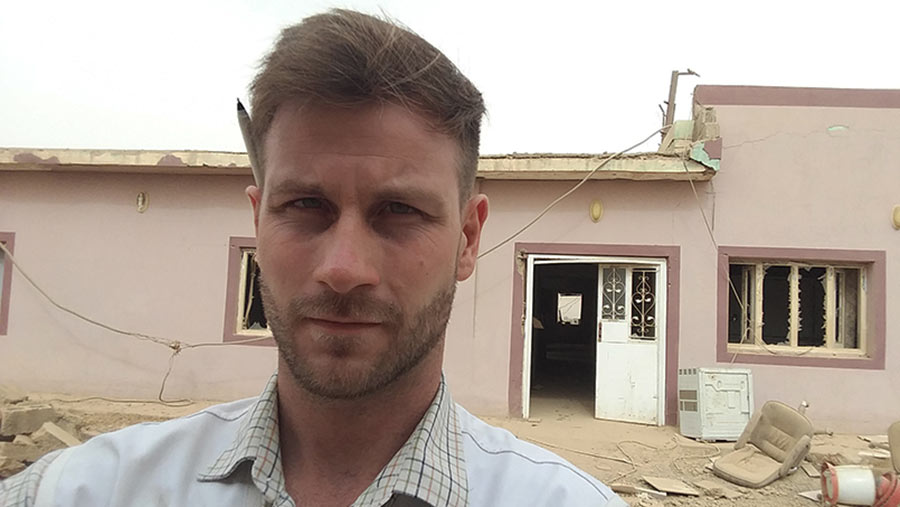 It’s almost become a rite of passage in agriculture for young farmers to pack their bags and head off to work thousands of miles away.

Many end up relief milking in New Zealand or harvesting vast swathes of crops in Australia. Roger Morton, a 27-year-old farm worker from Buckinghamshire, instead opted for Iraq.

This was not your average working abroad adventure, but it’s long been an ambition of Roger’s to work on an aid project with Médecins Sans Frontières, also known as MSF or Doctors Without Borders.

It’s a humanitarian non-governmental organisation well known for its projects in war-torn countries and regions affected by endemic diseases.

The organisation offers neutral and impartial medical assistance regardless of race, religion, gender or political affiliation.

To ensure full independence, MSF doesn’t accept government or agency funding and relies entirely on donations from the general public.

“It had always been a dream of mine to work for MSF but until now the timing wasn’t right and I felt that I didn’t have enough experience,” explains Roger.

He’s a qualified mechanical engineer who’s been working on a 1,200ha arable farm near Bicester in Buckinghamshire.

He recalls the exact moment when he decided to apply for an assignment with the organisation.

“There was a clear trigger moment for me – I was in the tractor cab drilling oilseed rape.

“I was listening to a BBC Radio 4 podcast which featured an interview with a surgeon who was caught up in a conflict zone.

“That was the moment that I thought to myself, ‘I have to do something’ and so I gave my boss three months’ notice.

Working 100 hours a week with most of it sat in a tractor alone with his thoughts, it was inevitable Roger was going to make the leap at some point.

He’s just returned from a six-month placement in Iraq working as a technical logistics manager, a role which drew heavily on his engineering skills.

MSF works across Iraq in regions frequently reported on during the war, such as Baghdad, Erbil and Kirkuk.

We can’t report where exactly Roger was based in case it risks the safety of volunteers who are working out there.

Following the fall of Saddam Hussein in 2003, Iraq has endured years of catastrophic conflict and the spread of extremist self-proclaimed Islamic State (IS) fighters throughout pockets of the country.

Since 2014, about 5.3 million men, women and children have fled their homes to seek shelter from the fighting. 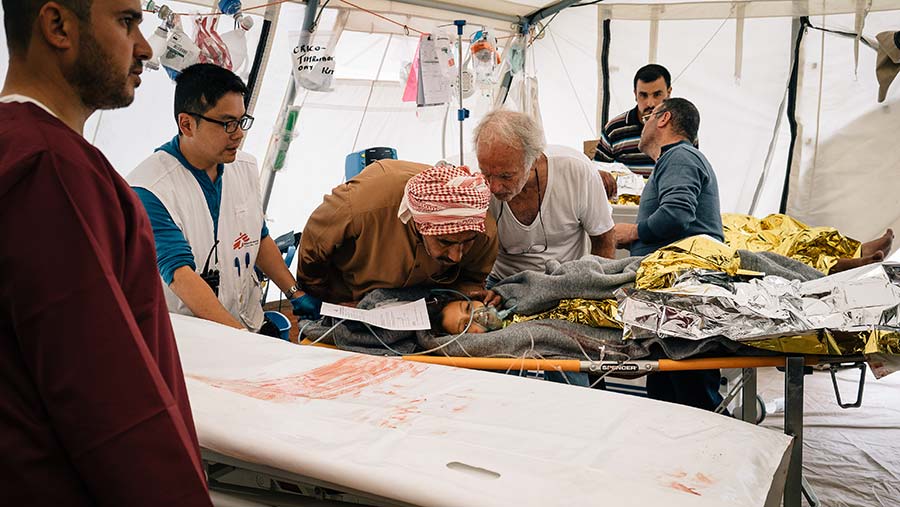 While the situation has improved since the darkest days of the war led by British and American forces, years of bloody conflict have had dire consequences for this country’s health sector.

Part of Roger’s assignment was to design and build a triage and stability centre for wounded people, set up just a few miles away from a conflict zone.

The boom of gunfire and explosions often formed a backing track to his time in the country. 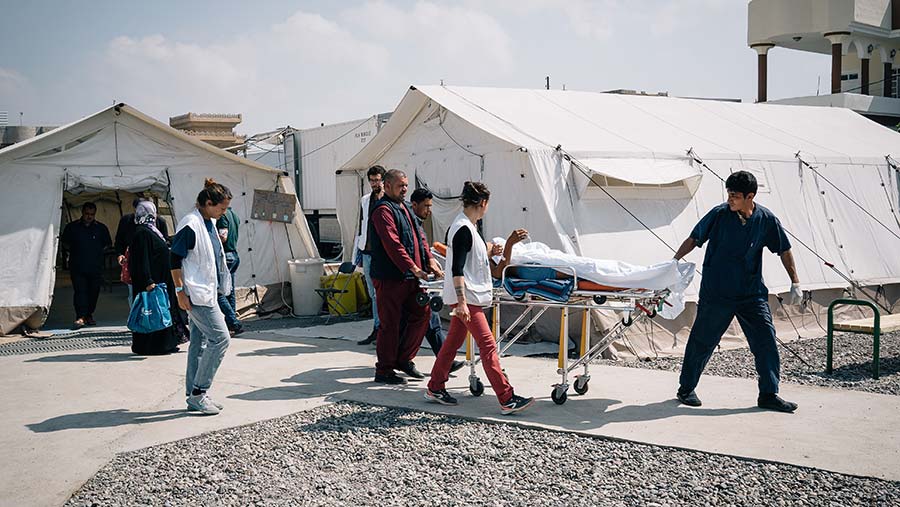 Innocent people caught up in the conflict would sometimes manage to escape but often their injuries were so severe they were unlikely to survive a journey to the nearest hospital.

See also: How a farmworker bagged a role in a blockbuster movie

Mostly constructed from portable buildings and tents, the centre he was tasked with setting up was to be the first port of call for any causalities.

“The guys that I worked with on the farm knew that I wanted to go off and do this, but one of the mechanics was a bit upset and couldn’t really understand it. He said I was mad for going to Iraq.

“I had to be honest with people about where I was going and what I’d be doing, but at the same time not to worry anyone unduly.”

He arrived in Iraq with his John Deere overalls stowed inside his bag and ready to get his hands dirty, but it soon turned out that his role was rather different to what he has imagined. 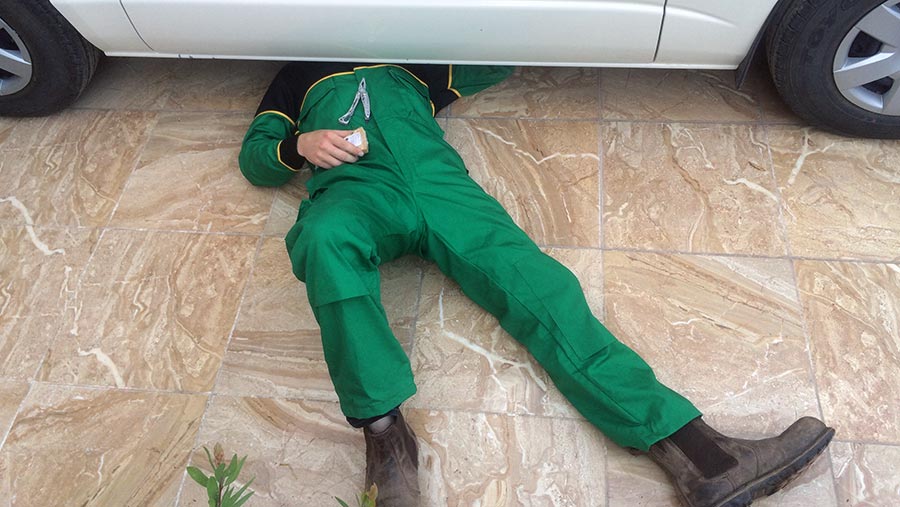 “I was expecting to do a bit of welding but instead I was working on the designs for the centre and project managing.

“I was used to doing everything myself on the farm, so I had to get accustomed to delegating the work to a team.”

Roger was also put in charge of moving staff around to various refugee camps, hospitals or entry points as well as day-to-day security. Naturally, he felt a lot of responsibility for the safety of others. 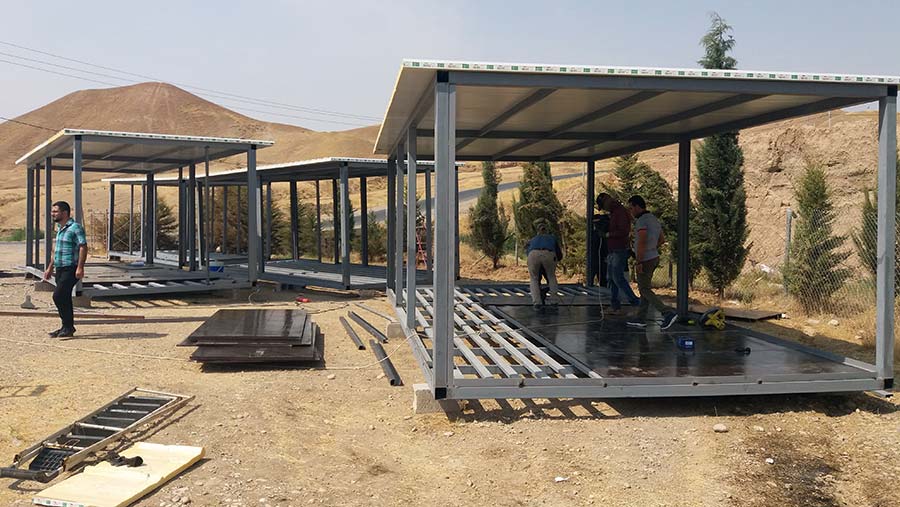 Part of the triage and stability centre being constructed

“The conflict was continually evolving and was going on all around us. One day it was totally normal and then overnight everything could change.

“It was very unstable out there but I never really feared for my own safety – I felt a bit like James Bond to be honest,” he chuckles.

“You have to know at all times where people are and I was nervous about this in the beginning – it was hard to keep track of it all.

“But people around me were so calm in a crisis and that’s probably one of the reasons why I never worried about myself.”

He says that Iraq felt strangely familiar to him and he quickly felt at home, partly because the local people he was working with really understood the quirks of British humour. 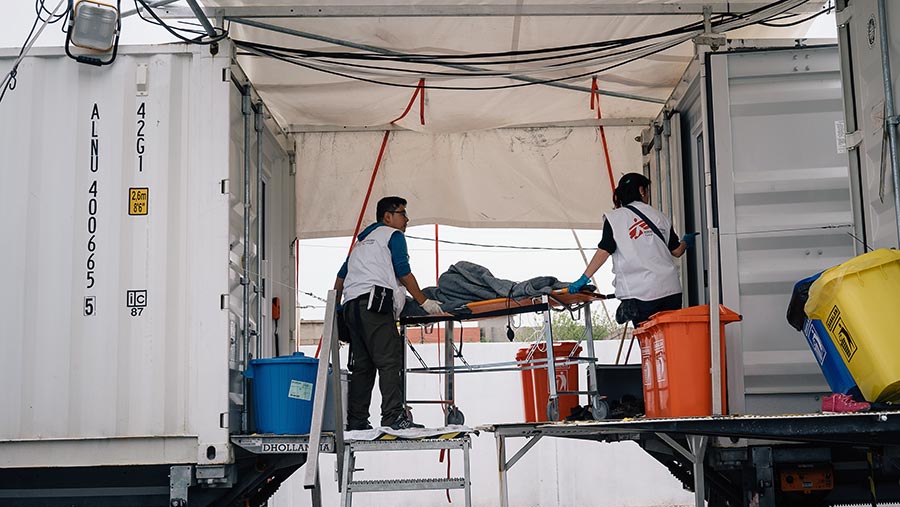 Having also worked on projects in India and Rwanda, he says his return from Iraq has been the easiest readjustment to life back in the UK, mainly because he wanted his freedom back.

On returning to the farm, the first thing Roger did was take the dog for a long walk around the crops, deliberately leaving his phone behind. A simple liberty for a farmer but it was the first moment of solitude he had enjoyed in months.

There are strict protocols in place to keep volunteers safe while they are working in areas of conflict.

“You couldn’t even go for a walk on your own, you’d have to take somebody with you and send a text to tell everyone when you were leaving and when you got back,” explains Roger.

He says farmers make ideal candidates for the sort of work he was doing in Iraq because they’ve got the right mentality to get the job done no matter what problems spring up.

“With farmers, there’s always a way to fix something and get around a problem. Farms need to be so efficient and are under resourced at times, but the job is always done to the best of their ability.”

He points to his farm’s assistant manager, Daniel Duffy, as a classic example of the determination that makes anyone from farming stock perfect for humanitarian aid work.

“Daniel does most of the spraying on the farm and is one of the best machinery operators I’ve ever seen.

“He doesn’t have much mechanical empathy, but even he wouldn’t ever give up or let a breakdown get in the way of his output.”

Roger is now working on designing a personal protection kit for people who may be exposed to the threat of chemical warfare.

Having worked as a sprayer operator, he’s already well versed in the safe use of chemicals and the necessary safety precautions.

“I’m trying to design a piece of clothing that has this protection built in, because the protective suits you need to wear are very cumbersome. I want to take all the thinking out of using the protection.”

If you’re reading this and thinking that you would like to get involved in a humanitarian project, Roger says it can be timed well with seasonal work on the farm.

“Volunteering means you can time it to miss the boring ditch-clearing work that goes on during the winter months, for example,” he says.

“Farmers make great all-rounders and I took away so many brilliant life lessons after my time with MSF.”

You can find out more about volunteering for this organisation by going to the MSF website.